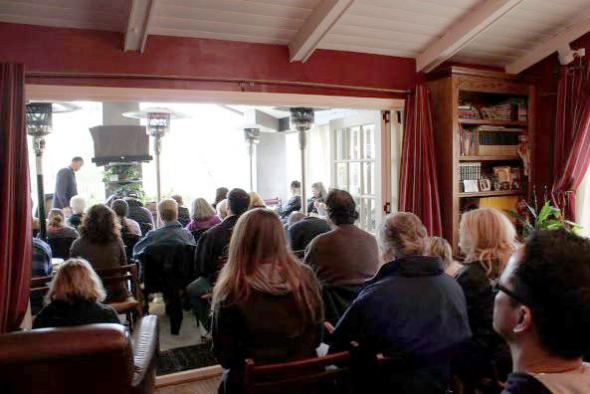 The two following stories of recent banning of family and fellowship Bible studies is not only a terrible threat to our freedom but also it’s a horrifying sign of the times we are entering into.  It’s just another fulfilled prophecy about end times and the coming dark events.  If not for the silver white lining of the return of Jesus our King I would be really sad and depressed about this.  But God has told us what is in store and He said that we should be able to tell just what time it is like we can read the coming weather.

It’s one thing hearing about persecution abroad and quite another watching the United States become Christophoebic. For the 16th year in a row, North Korea tops the list of 50 countries ranked for the worst persecution of Christians in the world, according to the Christian watchdog organization Open Doors USA.

A close second is Afghanistan, which jumped up one place since last year’s ranking. With the exception of North Korea, all the countries that cracked the top 10 are predominantly Muslim and most are in the Middle East and Africa.  The Christian persecution and condemnation stories posted at Open Doors are blood curdling.

The persecution and genocide of Christians across the world is worse today “than at any time in history,” and Western governments are failing to stop it, a report from a Catholic organization said.

The study by Aid to the Church in Need said the treatment of Christians has worsened substantially in the past two years compared with the two years prior, and has grown more violent than any other period in modern times.

“Not only are Christians more persecuted than any other faith group, but ever-increasing numbers are experiencing the very worst forms of persecution,” the report said.

The report examined the plight of Christians in China, Egypt, Eritrea, India, Iran, Iraq, Nigeria, North Korea, Pakistan, Saudi Arabia, Sudan, Syria and Turkey over the period lasting from 2015 until 2017. The research showed that in that time, Christians suffered crimes against humanity, and some were hanged or crucified. The report found that Saudi Arabia was the only country where the situation for Christians did not get worse, and that was only because the situation couldn’t get any worse than it already was.

A California family has been fined for holding weekly Bible studies in their home, meetings that are allegedly in violation of the city’s zoning regulations.

Stephanie and Chuck Fromm have been living in their San Juan Capistrano home for 18 years and were shocked when they received a notice of violation from the city. They have already been fined $300 and have been told they will be fined an additional $500 per meeting if they continue to meet without a Conditional Use Permit.

But they’re not backing down.

“Nobody should be able to tell us what we can do in our home,” Stephanie Fromm said. “Since when do we have to qualify who we have at our house and what we’re doing?”
Read More

A Christian couple in Pennsylvania has filed a lawsuit after being ordered by government officials to stop using their private property to host Bible studies or other religious events.

Officials from Sewickley Heights Borough, near Pittsburgh, ordered Scott and Terri Fetterolf last year not to use their 35-acre property to host religious activities, according to the lawsuit filed this week in the U.S. District Court for the Western District of Pennsylvania.
Read More