Update another 2022 article of how Zebra played key role in back scene roll out.

THE RNA DNA REPLICATING & ALTERING BACK SCENE IS THE MARK OF THE BEAST CONFIRMED BY THE FOLLOWING FULFILLMENT OF PROPHECY given in 2018 September by Jazweeh in a vision.

If taken the BACK SCENE will likely make it impossible to feel God or to repent…the RNA DNA replicating BACK SCENE must surely turn a person into something that cannot inherit the kingdom of God. Please please, this shot will be voluntary Satan cannot force anyone into his realm.  The choice is yours.

The Whole Story of the Prophecy

I have never gotten such a clear word from God in my life as I did when I asked My Father this question back in 2018 and then wrote the article below stating what He said.

I asked “How will I know the mark of the beast?”

And He answered me one word “ZEBRA”.  And that the mark of the beast would be connected to the word “Zebra” in some obvious way and by that I would know its the mark.  That was in September of 2018 over two years ago._____Jazweeh.

Truthers have suspected that RNA DNA back scenes will create a third strand of DNA and turn humans into GMO beings no longer human.  If they did it with fruit and veggies they can do it to humans.

Today I found the CNBC article (link on photos below).   CNBC shows that without Zebra Technology and their temperature reading labels for the back scene’s packaging, successful distribution may fail.  The back scene must be kept 94 degrees below zero. [the pfizer one anyway] Madurna vack not quite as cold.  Hence connecting the word “Zebra” given by God as a warning to what many already suspected is the mark of the beast. The back scene. (word coded for obvious reasons).  Here is the CNBC article. 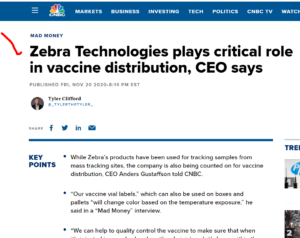 Jazweeh was assured by God that she will be able to identify the mark of the beast (to not take it) because it will be connected to the word “Zebra” in some obvious way.  She googled in 2018 and found Zebra tech (a company we had never heard of at the time).

I didn’t know the exact interpretation of how Zebra would be prominently involved.  The title of my article is accurate but I thought there would be an RFID involved. Once I looked up to see if there was a Zebra tech company and found it.  I then assumed that Zebra would make an rfid (as they often do) but rather they have created and supplied to Pfizer & BioNtech a new way to assure successful distribution of the back scene product by their temperature telling labels.

FROM HERE DOWN IS THE 2018 ORIGINAL ARTICLE PROPHECY

Who will Create the Mark of the Beast Technology for the United States?  And maybe for the Entire World!

Ladies and gentlemen, Jazweeh the born-again prediction-ist who does not call herself a prophet even though she has predicted several future events correctly, has given me her recent meditation vision.

She went to God The Father who sits on the seat of mercy, who judges the saints, He, who created the Earth and it’s angels.  He, who created mankind and will carry out man’s fate unto the war of Armageddon and the end time prophesies and events.   This Most High God, The Lord our Provider, The Lord our Righteousness, The Lord our Life and Light in a dark and dangerous world.  He who sits in His seat readied, with His Armor on and boots of Golden Brass.  He is Mighty and He is Most Powerful in all His Glory, Power, Generosity, and Honor!

Let me tell you favored saints what she saw.  To all sheep, lambs, and even lions of the Lords tribes and armies who are utterly blessed to see this post.  God has chosen YOU to join into his Holy and Sanctified war of old.  Either by command or by intercessory prayer you are imparted as The Body of Christ, and the example you set in your community is paramount to spreading The Word.  The war we are in supersedes time itself and it WILL be finished soon.

He answered one word “ZEBRA” I perceived Him to say “you will know the mark of the beast because it will be attached to the word “Zebra” in some obvious way.” This is the translation I got, as God The Father does talk in thoughts that are very fast.  He speaks in whole concepts in an instant.  “I went to the computer”, said Jazweeh and Google searched the words “Zebra, hi-Tech”.

Much to my astonishment, I found the exact under the skin tag, or R.F.I.D. to fit the bill of buying and selling as outlined in prophecy created by Zebra Tech non the less.   Scanning and tagging is their expertise.  They have purchased most of Motorola recently.   I am certain that either Zebra Industries or Zebra Technologies will get the contract.  Since this is a vision/dream that happened during meditation in Christ and the word “Zebra was so pronounced and clearly given during that time, I don’t see much room for a prediction fail.  I mean, what are the chances there would be a specific tech company by that name that neither of us had ever heard of?

It’s no coincidence people.  This one is 99% chance it WILL COME TO PASS.  Please children don’t risk buying stock with this company, I fear it would be an offence to God just as bad as taking the mark itself.

Figures the name of the company is a “beast”Zebra, it makes perfect sense.   I have been looking for links between Satan, the occult and the animal Zebra and have not found any as of yet.  If you know anything about this please message me at livingword@jazweeh.com.  The company rulers and board of directors themselves may not even know what is in store for them regarding such a horrible task as the international mark.  Or perhaps they will get the contract only in the parts of the world that Jazweeh lives in, hence the vision was primarily for her.

Please note the company Foursquare in Illinois who chipped their 40 employees used a different tech company called, BioHax International partnering with Three Square Market in this innovation.  More on the barcode technology at this website https://endtimestruth.com/666-2/barcode-technology-666/

When Jazweeh told me this story/vision to my own shame I first was compelled to buy stock.  A company that creates a worldwide mark will surely increase profits dramatically.  However, in thinking further that would surely be as bad as taking the mark itself, would it not?  So I declined.

Second this made the end times very real for me and I am taking it much more serious today than yesterday.  Jazweeh spent a day crying and processing her stark surprise to this graphic and distinct information.  Don’t be desensitized children.  This is big news.  And it means our Lord is coming soon but also hard times as well.

UPDATE.  If you did not read the top portion come to find out Zebra tech got the job of shipping the back scenes (the mark of the beast) kept below absolute zero in their transport by the very tech company that God told me would be associated with the mark.  The back scenes given to the world change mankind into part beast.  I have studied the workings and affects of the back scenes for over 4 years.

(coated words) GMO humans is the result of world wide back scenes.  And finally the new [micro saufté I’m mune sis teem] will be implemented at a cost for the new gmo brand of bodies.  Cancer will likely be cured because a new array of dis ease is on the horizon.  Automotive im mune dis ease’s are the future of Pig farmers $$. #1 mission of the back hack scenes is to crush the old hat immunities hijacking the first line of defense put in place by God. (coated words) Replacing God’s I system with the new micro saufte’ i’m youn sis stem.