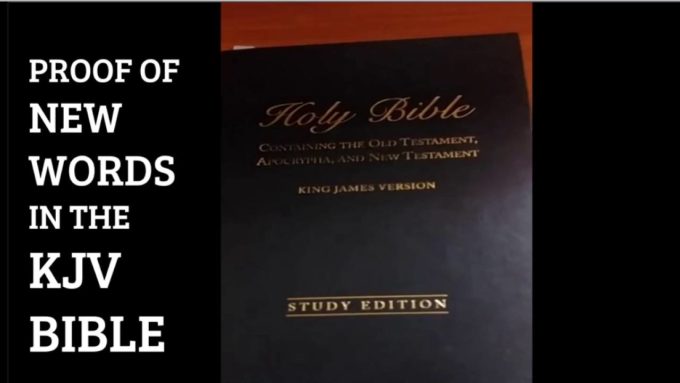 Footnote.  Oddly enough I have a Bible that is not corrupted but its the New American Bible which is a Catholic publication. In my attempt to stay in the solutions and out of the problem I am relieved I have one Bible that is written how my mind remembers it.  Oddly I have never read this version.  The versions I HAVE read, studied, underlined, and spend thousands of hours learning and memorizing are the two KJV Bibles that are unfamiliar to me and worse they are offensive.  So, what does this mean?  Since I now have a pure version as far as I have checked there is no sense to continue with this Bible change log.

Well either the books have changed on the shelf or our reality has changed all together and I am in the wrong dimension.  I don’t know why my Bible is full of grammar errors, mis-spelled new ridiculous words and scripture that is so jumbled a five year old could do better.  I don’t know why.  But it is written that Satan will exalt himself over all things called God.  This is my best guess as to why my Bible has been debauched.  Clearly the KJV used to be the purest form of the written word that we had.  Not anymore.  Now the only pure form I have is a Catholic Bible and I am not Catholic…not even close.

2 Thessalonians 2:4 New International Version (NIV)
4 He will oppose and will exalt himself over everything that is called God or is worshiped, so that he sets himself up in God’s temple, proclaiming himself to be God.

Surely Satan IS and HAS set himself up in our Holy Bible’s especially the most accurate of eloquent of all translations The King James Version. Is this not our Holy Book of God?  It says right here “He (the lawless one) will exalt himself over EVERYTHING that is called God or is worshiped, so that he sets himself up in God’s temple, proclaiming himself to be God!

This is a work in progress and it will take years to finish no doubt. Please correct me in the comments section if you see a mistake that I might fix it.

New resource for searching out the origin of words.  Many of these words don’t have an etymology according to https://www.etymonline.com search.  So I am not sure what that means except new words are that brand new that even this Bible Word Etymology website doesn’t have them listed.

On this exhaustive new words in the KJV list I am not going to touch the Proper Nouns or names.  So many of them look new and wrong to me it would take too much time.  Furthermore names was not my strong suit.  I have read the KJV Bible New Testament many many times.  The Old Testament I have read all the way through and studied extensively since 1989.

The Greatest Commandments of Jesus are now written as “Royal Law“…ridiculous! Look how neighbor is spelled and fulfill is mis-spelled.

If ye fulfil the royal law according to the scripture, Thou shalt love thy neighbour as thyself, ye do well:

STUPID is all over the Bible’s except KJV and NKJV

1st Samual 20:30
New Living Translation
Saul boiled with rage at Jonathan. “You stupid son of a whore!” he swore at him. “Do you think I don’t know that you want him to be king in your place, shaming yourself and your mother?

Folks if this one doesn’t convince you nothing will.

And thou shalt make for it a grate of network of brass; and upon the net shalt thou make four brasen rings in the four corners thereof.

And he made for the altar a brasen grate of networkunder the compass thereof beneath unto the midst of it.

And he made the pillars, and two rows round about upon the one network, to cover the chapiters that were upon the top, with pomegranates: and so did he for the other chapiter.

And the chapiters upon the two pillars had pomegranatesalso above, over against the belly which was by the network: and the pomegranates were two hundred in rows round about upon the other chapiter.

And a chapiter of brass was upon it; and the height of one chapiter was five cubits, with network and pomegranates upon the chapiters round about, all of brass. The second pillar also and the pomegranates were like unto these.

And there were ninety and six pomegranates on a side; and all the pomegranates upon the network were an hundred round about.

From the word to “abhor” something we don’t add “ing” to words like this.  Notice also carcass is mis-spelled. That would sound like car cases.

Isaiah 66:24  And they shall go forth, and look upon the carcases of the men that have transgressed against me: for their worm shall not die, neither shall their fire be quenched; and they shall be an abhorring unto all flesh.

I can’t even get an online definition of this one.  It say “objects” when I search it. Strongs 5222 to strike or hit.

No it would have been “he made his abode” not ”

Why abodest thou among the sheepfolds, to hear the bleatings of the flocks? For the divisions of Reuben there were great searchings of heart.

And Sheepfold WTF?   Probably used to say herds, or herd.  Bleatings may have said “cries” of the sheep.  And abodest would have been “make thine abode”

Right.  This word 776 Strongs is a modern term.

But after long abstinence Paul stood forth in the midst of them, and said, Sirs, ye should have hearkened unto me, and not have loosed from Crete, and to have gained this harm and loss.
STRONGS NT 776: ἀσιτία

SPAKE  Should be spoke or speak or speaketh

SAITH    Used to be SAYETH

SOEVER
Strong’s 834, 1437, 3745, 302
†ἐάν eán, eh-an’; from G1487 and G302; a conditional particle; in case that, provided, etc.; often used in connection with other particles to denote indefiniteness or uncertainty:—before, but, except, (and) if, (if) so, (what-, whither-)soever, though, when (-soever), whether (or), to whom, (who-)so(-ever). See G3361.
Okay looks like the Alcoholics Anonymous agenda has reached into our King James Version Bibles.
SOBRIETY-   Was sober minded or sober minded-ness possibly
SHAMEFACEDNESS
Before?  shame faced maybe.  This word shamefacedness is NEW.
LETTETH
Strong’s 2722
Wicked is now capitalized and it’s not at the beginning of a  sentence either.  Please look this up in your KJV Bibles.  What are the implications of “W” in wicked being capitalized as we would capitalize the The Word, God, The Lord, and Jesus?  Isn’t it obvious?  To capitalized the word wicked means that it is now in this book considered to be sovereign and on equal footing with The Lord God.  Furthermore The Lord is now the Lord and THE LORD is The Lord no longer all caps in many places.
Please check out this link and her EYA youtube channel.

And then shall that Wicked be revealed, whom the Lord shall consume with the spirit of his mouth, and shall destroy with the brightness of his coming:

Despite it’s ridiculous wording this is one of the most enlightening scriptures for the end days.  As it explains why some people see the Mandela Bible changes and others do not.  Or see any changes for that matter.

And with all deceivableness of unrighteousness in them that perish; because they received not the love of the truth, that they might be saved.
DAMNED
Believe it or not this word was not in the KJV of the Bible especially not in this scripture:
“That they all might be damned who believed not the truth, but had pleasure in unrighteousness.”
I believe the word here was “lost”.
ALWAY
NEW WORD
Should be “always” or not at all.

I believe that in 2nd Thesselonians 2:10 reveals why some believers see the Bible changes and some don’t. For they did not Love the Truth, they did not hide the Word of God in their hearts and they did not rightly divide the truth. You can know and study The Word inside out and still not Love it and therefore be deceived by the strong dilusion.

“And with all deceivableness (should read deception) of unrighteousness in them that perish; because they received not the Love of the truth, that they might be saved.”

God Is Love.  1st John 4:8.  Therefore Love should be capitalized in my book.

But we are bound to give thanks alway to God for you, brethren beloved of the Lord, because God hath from the beginning chosen you to salvation through sanctification of the Spirit and belief of the truth:
2Th 2:14

Whereunto (where unto two words) he (He should be capitalized) called you by our (the gospel not our gospel, the gospel of Jesus Christ His gospel) gospel, to the obtaining of the glory (“salvation” we do not obtain glory we are not called to glory it is Christ who is The Kingdom The Power and The Glory forever and ever. We are called unto salvation.) of our Lord Jesus Christ.

So now we have:

I don’t know this may or may not have been a word.

No way.  This is a NEW WORD

Do you see the trend?  Same word spelled just any hap-hazardous way they wish to make up.   Somehow it feels like they are eluding to the “get laid”

phrase of lay
I don’t know what to think of all this.
FATFLESHED
NEW WORD
I am going out on a limb here to say these to words are new
MILCH  5763 Breast Milk Ready?
KINE 6510  Nursing Cow?
EMERODS H2914
https://www.etymonline.com/search?q=emerods  No results zero so this word has no origin.
Strong’s definition:  [tumours, haemorrhoids, piles]  So that is what?  A freaking hemorrhoid?  But they just decided to drop an a in it.  Plus using Mice Hemorrhoids of Gold? 1st Samuel 6:11 this has to be the most insane fake scripture they have written yet.  Whoever is authoring this New Bible blasphemy is really very sick.  And what tumor now has a “u”?  Wake up world.

“snuffdishes” – this word didn’t have an entry in etymonline or ngrams. did not. not when i first did the research on it several weeks ago, as i remember looking it up and also since there would be no reason for me to record otherwise. not the first time something like this has happened…anyway, now, it does show hits in ngrams, though not until 1820!! so, yea…well, still no entry in etymonline at least.

“evilfavouredness” – and this word didn’t (and doesn’t!) have an entry in etymonline or ngrams. so make of that what you will.

Paradise for the Hellbound Author/Designer
1 second ago
7 devils Mary Mag I have known story for a long time since 20 years ago. New word wait, “TUBAL CAIN”? Not sure why but that one comes against my spirit.

You will need to look these KJV New Bible words up if you want to see scriptures and how these new words are used.

TRICKLETH, asses 60 times, OKAY ATTENTION: My Paper book “Strong’s Exhaustive Concordance of The Bible” copyright 1986 now separates these 3 Bible words with a space like this: TRESP ASSES, TRESP ASSING , TRESP ASS-OFFERING (exactly like that,title words with the following scriptures listed) To intentionally create the cuss words “ass”. This is not a normal thing for the book version especially in that way. I have studied for years.

Expenses is in Genesis twice.

Extortion is in bible

And, behold, there came up out of the river seven well favoured kine and fatfleshed; and they fed in a meadow.