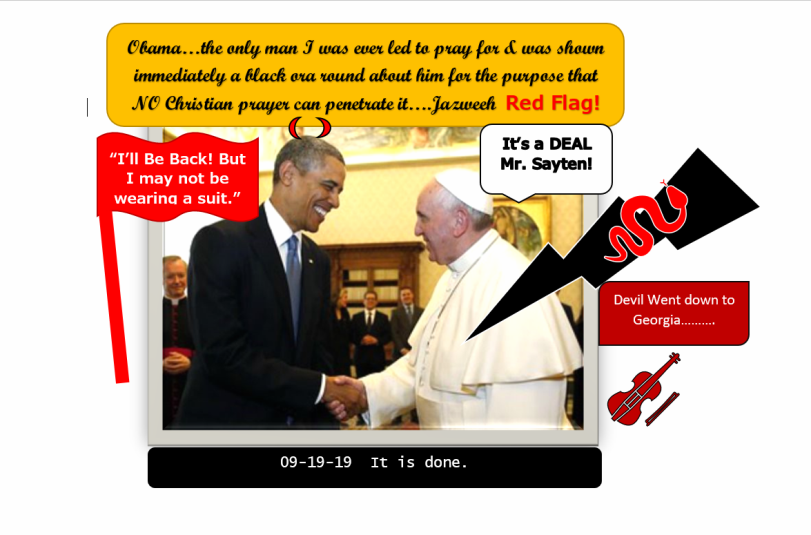 Update we believe this vision below was not fulfilled until May 27th 2020. A bright meteor is seen falling like lightening from Heaven over Turkey and Armenia. Turkey is a major player (we feel) in end times conflicts. Due to free will and human error we had previously thought the vision below was already fulfilled. Forgive us for not waiting on confirmation which we have now received.

Jazweeh has had a vision on 5-30-20 indicating Satan has truly arrived without a doubt.

Expect the Papacy to exhibit much more power in the near future due to the deal between them and Satan who has this day fallen from his heavenly abode unto Earth.  Before he inhabits the human body of the Antichrist he will make a deal with the pope of the Catholic legions…the black pope.  The true pope with the power and with a overwhelming desire to rule all of humanity by worship and be loved by millions.  The devil will promise him this for a price.

This fall is different than the original fall of the 200 angels upon Mt. Hermon or 10% of the 200 I should say.  They still abode in the second Heaven or 1st.  This fall is the one that must happen to affect Satan in a way that he can inhabit a human body and become the anti-christ.  I don’t have time for a study on this. Here is the vision.

“And he said unto them, I beheld Satan as lightning fall from heaven.”

I saw a supernatural large powerful golden arrow with a gold rope attached to it seek out Satan in Heaven who wore a golden armor he still appeared as a mighty angel of light and looked hansom.

I watched the arrow dash and and suddenly pull him straight down to earth.  The event put Satan into a form that he can inhabit the man of sin.

On this date Today, Satan has fallen as lightening from Heaven.  And he is pissed.  He is headed to speak to him who is called “saint”.

I figure the pope.

Furthermore he seeks to make a deal with the pope to give the pope what he has always wanted…which is……power over all religion.

The pope wants to rule by religious power.  This means for the pope to make laws unto every church head that will be adheared to.  Rule over every presbytery and creed.  Rule over every branch and tittle that is called religious.

How will Satan give this mighty power to the pope?  Satan must inhabit some very powerful and wealthy human.  Once he makes the deal with the pope then Satan will go on to inhabit the body of his choice.

I figure he will want to inhabit the very most powerful and rich man on the face of the earth whomever that may be.  Or inhabit he who has potential to be the most powerful man or woman on Earth.

Keep in mind it would be someone who can be worshipped and love and who would easily convince the masses to take the mark of the beast.

Therefore rejoice, ye heavens, and ye that dwell in them. Woe to the inhabiters of the earth and of the sea! for the devil is come down unto you, having great wrath, because he knoweth that he hath but a short time.

And when the dragon saw that he was cast unto the earth, he persecuted the woman which brought forth the man child.

Rev 12:14  (this is two fours it means reference to the 144,000)  If your the chosen you are being nourished NOW and have been for a couple years.  Your already in battle and I don’t mean bondage or oppression. I mean the 144 are already fighting and overcoming dark forces daily.  If they were not activated now things would be far worse.  Remember Its not faith if its not faith.  These 144 are not gravling with their own issues.  They have already overcome and already come out of great great tribulation in their own lives.  They have already been tempered, purified, tested by trials of fire, and have suffered greatly.  They are the lambs that are NOW LIONS.

“CHILDREN OF THE SON BEGIN TO AWAKE….WATCH OUT” see decode of battle of evermore song Led Zepplin.

And to the woman was given two wings of a great eagle, that she might fly into the wilderness, into her place, where she is nourished for a time, and times, and half a time, from the face of the serpent.

And the serpent cast out of his mouth water as a flood after the woman, that he might cause her to be carried away of the flood.

And the earth helped the woman, and the earth opened her mouth, and swallowed up the flood which the dragon cast out of his mouth.

And the dragon was wroth with the woman, and went to make war with the remnant of her seed, which keep the commandments of God, and have the testimony of Jesus Christ.