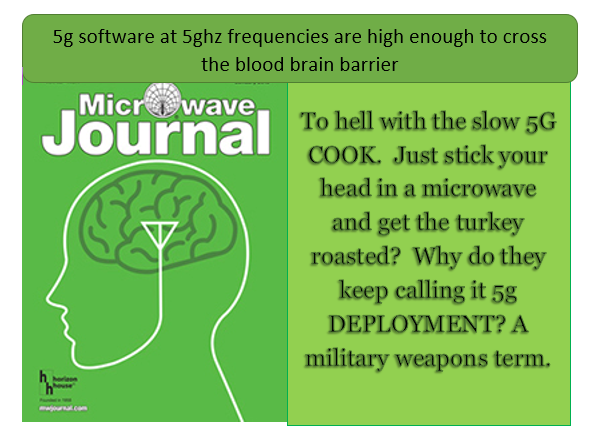 Silver fabric probably sold by the same chumps who are putting out the 5g is $20 a FOOT.  That’s 12 inches folks.  Joann’s Fabric Confetti Dot Metallic fabric blocks and/or reflects emf (I tested it and discovered it myself…how?  I am a seamstress so I tested all my on hand metallic fabrics with my Meterk EMF Meter Electromagnetic Field Radiation Detector

for emf reflective or blocking capabilities with both router and smart phone.  It works best with two layers.  Confetti dot is $7 a YARD x 45inches Content: 83% Nylon & 17% Metallic .  Double it when in use double it.  Make your curtains out of it and I recommend the gold or silver colors.

This article is the solutions to 5g wifi deployment & injury.

The manufacturers of internet connections do not care if you get sick and they will lie to you about 5g and smart meters.  There are already hoards of lawsuits in the works.  Please protect yourself.

Nobody wants to think they have an enemy who wants them DEAD.  It’s too much fricking work to have enemies.  So we stick our heads in the sand and say “it’s all poison anyway” and your right it is all poison.  or “they wouldn’t do that to us”, or “that’s just BS” or “Everyone has to die somehow”.  WELL if you suffer with an illness years on end due to sticking your head in the sand you may want to rethink the “ignorance is bliss” theory.

Ignorance is your choice, but what about your children and grandchildren?  Will you let them suffer as well just so you don’t have to wire your fricking devices?  Come on people it’s not that hard.  Buy some ethernet wire and turn off the routers radio signals.

#1 Do not get smart appliances put in you home Legally opt out of smart meter or cover it w/amazon $50 screen..

Its bad enough having a smart meter outside on your electric pole that communcate with the router out on the street on every block.  (Identify routers on you street at every block or so.  See metal arm on electric wire poles with white box on it) What is a smart meter?  Smart meters far exceed safe levels of emf uT. The meters are worse than routers and cell phones.  Do you remember the electric pole outside your house with an analog meter that your meter reader used to check?  That is an analog meter.  The elec. company will come around and try to replace it with wifi detection digital meter.  If you have smart appliance they will blast wifi all through your home and talk to the electric pole meter.  Opt out of smart meters or stay stealth and just cover it the day you get it so they don’t notice the weaker signal.  By law you can OPT OUT.  But they may charge you because a man will still have to check your meter the old way.

#2 DO NOT USE WIFI IN YOUR HOME ever.

And still have internet hard wired by ethernet.  Log into your system control page for your router.  Easiest way to login to router is to connect an Ethernet from the router to a laptop so your browser recognizes it.  Then get the default login address (http://routerlogin.net or http://192.168.00 address depends on the brand of router.) and default username and password. (usually admin & password) Turn off all four radio buttons for 2.4ghz and 5.0ghz wifi.  Turn off both SSID broadcast ad SSID enable.  There are directions online.  This is not a usual wifi login.  It is a router system control page login specific to your brand of router. Yes you can wire all devices and still have internet.  Your wired internet will work better than wifi floating around crossing the blood brain barrier.  Wifi is strictly for convenience.  If you want speed turn if off and hardwire everything.

What does router login look like?  Your router like netgear, belkin will look a little different with the same basic settings to shut off wifi and still have wired internet. 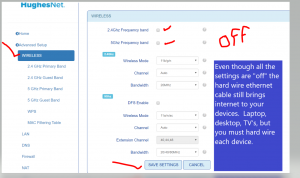 Using silver fabric or lead apron to guard your body can cause more problems.  Not sure how the waves travel I just know that silver block fabric on my head causes headaches.  I feel the waves may be getting trapped under the fabric.  Furthermore if your going to use lead or silver protection be sure you know what your doing as far as the way the waves travel and how to keep them from accumulating under that metal.  Furthermore the best thing to do is stay away from the signal.  Reflective barriers also work but again you want to reflect out not accumulate under.  If your in your car turn off the cell phone or you will be in a faraday cage with signals bouncing everywhere.

#4 DO NOT SEND OR RECEIVE MEDIA AND EMOTICONS VIA Cell phone.

Cell and router Signals are huge emf emitters especially if emoticons are being sent to you.  Tell your friends to send text only text, texts. NO PHOTOS.  I did the experiment myself and was shocked when emoticons emitted 4.24 uT radiation from my cell phone over the .75 of a regular text msg with no media.

OBVIOUSLY KEEP PHONE AWAY FROM BODY AS MUCH AS POSSIBLE.  KEEP YOUR PHONE IN A DIFFERENT ROOM.  Never sleep with a cell phone.

#5 Take the baby monitor out of the baby’s electrical space!

#6  Don’t sleep with LED lights on ever.

#7 No LED white light at night.

Wear mirrored sunglasses in walmart and other type stores.  When on the road at night wear mirror sunglasses to block LED headlights. WEar reflective fabric over your brain or fetus when travelling on the interstate and turn off cell in your car always.  Don’t make your car a lethal Faraday cage.

8#  Educate yourself and your children.  Learn more about emf, elf, microwave radiation.  Don’t ever use a microwave to cook.

There is a tabu called “negativity” by social status quo, it is the elites brainwashing tactic that says (by movies, commercials, other media mind control) that we are NOT allowed to be “negative” because its totally “un-kool”.  I say this….what if they said that during the NAZI regime holocaust?  Perhaps Hitler could have killed another 5 million if everyone would have considered anything “negative” as being un-kool and unacceptable.  Do you see how this brainwash technique works well for the evil at large?  If your not apart of the solution then you are part of the problem.

Not to say that criticism or verbal attack are not evil, damaging and unproductive.  But if someone is being poisoned you don’t refrain from telling them in hopes you won’t be viewed as “negative” by peer pressure status quos.

So its bad to point out that we are in the midst of a digital holocaust that far exceeds in death rates that of the second world war.  The plague is Cancer and nearly 2/3 of us WILL GET IT if we don’t start raising hell over all the toxic bullshit that the elite are shoving down our throats.

#9 Keep both cell phones and router outside of a metal roof where signal and radiation can escape your home.  kEEP these devices away from human bodies.

Put router at the opposite end of the house and hard ethernet wire all your devices to it.  Turn off the wifi emission aspect of the router.  You will still have internet by ethernet wires.  Surround the router with aluminum foil so the signal escapes emits upward rather than outward toward your body.  Even with wifi off the router puts out high levels of radiation.

You are wired in so since the router and cell phones put out well over 4.00 emf above (safe limit being .25) radiation levels even when wifi is turned off router emits lethal doses to your brain.  Your phone emits strong radiation signals when it receives texts etc. then blasts them out to you.

Your devices should be hardwired but they will still emit radiation.  So put both cell phone and router in a remote storage room with foil or silver fabric to block radiation from the direction of family rooms and bedrooms. Do NOT BLOCK HEAT VENTS on the router.  You want the signals to leave your house upward and out so no metal roof over the router ever.  You can add double layers of aluminum foil say on the wall around the router to block it from the direction where people will be.  Use the walls for the foil to guide the radiation up and out.  Use your common sense.  We are brainwashed to take directions, this is our undoing.  “All the day long my people perish for lack of knowledge.”  Says The Lord.  Knowledge of what?  Knowledge of YOUR ENEMY THAT WANTS YOU DEAD AND SICK.

#10  Buy both microwave leakage meter and an emf rf frequencies meter to protect yourself from high radiation areas by knowing what your up against.  Plus having the meter will make the radiation become real to you since it is invisible people tend to equate invisible with non-lethal or non harmful.  If you can’t see it it can’t hurt you right?  WRONG.

One Reply to “5g Safety for Pregnant Women, Adults, and Children”