More earthquakes in Turkey.  5.6 hits Manisa province.  Still not a fulfillment of the prophecy.  Not yet the wrath of God event. 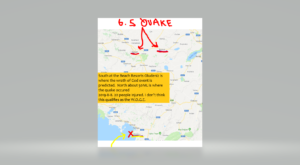 USGS reports a 4.6 and a 5.8 occurred very close together.  No wonder there is much confusion in the articles I read on these quakes.  I have read that USGS and the powers that be are seriously playing down all the earthquakes since the beast system wants no one to wake up that we are in end times.  Experts say it had to be more than a 5.8 by the descriptions of damages.

Why would people jump out of their balconies unless the building was collapsing on them.  They had to be terrified.  Reports of 20 people injured.  Mayor of Tutluca, said “We have 192 households of which 100 are not damaged.”  Strange way to put it.  That means 92 houses were damaged in the city of Tutluca.  Yet this Tutluca is the neighboring town so what really took place in Bozkurt where the quake happened?  No reports to be found on that, except saying “at least 20 hurt” and “more than 20 people injured”

The quake was centered on the town of Bozkurt, in Denizli province, according to Turkey’s Disaster and Emergency Management Presidency, AFAD. It said the quake struck at 2:25 p.m. (1125 GMT) with a preliminary magnitude of 6.0. The town is 600 kilometers (375 miles) south of Istanbul

The Istanbul-based Kandilli seismology center said the quake was less powerful, measuring it at 5.7 magnitude.

AFAD said 23 people sought medical care or were hospitalized after the quake.

The mayor of Bozkurt, Birsen Celik, said the quake knocked down two houses in the town and damaged several other homes.

“The earthquake lasted more than 15 or 20 seconds,” she said. “Several houses have been damaged, roofs have caved in and there are deep cracks in walls.”

My problem with this Washington Propaganda article is that the NEIGHBORING TOWN HAD OVER 90 DAMAGED HOME YET THE TOWN WHERE THE QUAKE WAS CENTERED THEY CLAIM ONLY SEVERAL HOMES WERE DAMAGED AND TWO HOUSES KNOCKED DOWN?  Something isn’t adding up here. More WILL be revealed.

I don’t believe anything the beast system proclaims and this is a perfect example of the mixed messages and contradictions of the beast media.

Today 08-08-2019 There was another end times sign in Turkey.  A 6.5 Earthquake hit very much near Oludeniz, Turkey the location of Jazweeh’s Wrath of God Event Prediction.

However being that Bozkurt and Denizli were the quake occurred is 50mL north of Oludeniz it cannot be the event predicted by Jazweeh.

Since this earthquake occurred however I have read seismologist predicted even before this quake of an expected Great Earthquake of 7.0 or greater to hit Istanbul.

Turkey is among the world’s most seismically active countries as it is situated on a number of active fault lines, and dozens of minor earthquakes and aftershocks occur daily. The most potentially devastating fault line is the NAF, where the Anatolian and Eurasian plates meet. A strike-slip fault that formed as the Anatolian plate was being pushed northwestwards by the Arabian plate, the NAF has produced devastating earthquakes throughout history.

2 days ago U.S. and President Trump  is now considering sanctioning Turkey and has removed them from the F35 Fighter Jet Program for purchasing Russian missile defense systems the S400.  The Russian made missile system in Turkey expected to be fully deployed by April of 2020.  Things are clearly heating up with the U.S. & Turkey.    Turkey has said they will retaliate if sanctions are enforced against them.

NATO radar & NATO systems to be functional according to TRT World Straight Talk News  Turkey spokesman Hasan Unal Maltepe University professor said “We have a huge army, this weapon system (the S400 Russian missile system) will be stand alone, completely controlled by Turkey not NATO”.  Unal also said “The U.S. is employing a terrorist organization even though its outlawed by U.S. and Russian.” I suppose he meant the YPG who are mostly ethnically Kurdish, and also includes Arabs, foreign volunteers, and is closely allied to the Syriac Military Council, a militia of Assyrians.

Since we knew nothing about the North Atlantic Treaty Organization a military pact between 29 countries we found this article and a list of the countries who are members of the NATO pact.

The United States, Russia, India, France, Israel and China have all developed missile defense systems.  Not all countries make their own systems.

So what is odd and makes it seem ALL ABOUT MONEY is Unal is saying they might offer the U.S. to purchase a bunch of Patriot missiles to “appease The U.S.”.

WHO ARE THESE PEOPLE RUNNING THE DEFENSE SYSTEMS?  A BUNCH OF MEN HOLDING THEIR WEENIES IN HAND WITH MEASURING STICKS.  Leave Turkey alone.

NATO needs Turkey incomparably more than Turkey needs the former. Turkey holds the geopolitical pivot NATO depends on for its Inner Asian, Middle Eastern and Russian policies. Meanwhile, Turkey not only gets to keep all the stuff it has received from NATO, but can simply re-orient itself towards more eastern alliances (read: SCO).

Turkey’s departure from NATO, if realized, may yet prove to be one of the determining events of the early 21st century – the US has spent absurd amounts of resources and effort taking over the former Warsaw Pact countries, only to now see the ally it had been hoping for as the southern containment wall against Russia simply get up and leave.

Turkey can, and in recent years has, levied one of the defining influences in the Syrian civil war through its irregular war with Assad and Rojava, as well as anti-Russian posturing. Without this, the span of prime geopolitical territory running from the Crimea to the Bosporus to Pakistan is not-so-suddenly placed largely outside NATO and more accurately US influence. The delicate roots in Turkestan needed Turkish support to grow; without it, they will wink out of the field of political relevance. Instead, real US influence will be confined to the arc of states from Egypt, Israel to Saudi Arabia and potentially India.

What the US should do now if it was a humble, pragmatic political planner would be to deliver Gülen with a note of apology as well as reassurences about an “enduring relationship” and attempt to salvage its relations (though I doubt Erdogan would budge; he’s merely using Gülen as an excuse to purge all opposition, real and imagined). Instead, Kerry has threatened Turkey with what was a very politely phrased admission that it could be kicked out of NATO, as well as turning a failed coup against Erdogan into a “loss for democracy” in W. media.

Enlightened self-interest has never been one of NATO’s strong suits.

The God of War is a High Level (demon ruler of sorts) Demonic entity that transcends time.  The God of War inhabits powerful men from generation to generation consequently history repeats itself by these possessed humans.  It has a demon hoard which it commands.  These demons follow the dark demonic ruler through time and space from powerful wealthy man to man to inhabit and control them.  These men are haunted within their own hearts and minds.  The God of War was once an angel.  Now it commands demons and humans.

How is it men commit unspeakable acts of brutality, rape, murder, genocide, and fearful slaughter?  They are possessed by demonic forces who have been inhabiting rulers for eons.  Why does history repeat itself over and over?  It is controlled by the same demonic forces over and over.  One man dies and the next rises up to take in the same demon of his predecessor.  War for profit and the military industrial complex DID have a restrainer keeping back the worst army hoards from mankind to a point.

No more.  The restrainer in the natural has been put down only so another much worse warmonger can take control of three armies.  See the three armies here.

They are slaves to sin and the lust for blood as they ravage the innocent.  Such a hate is unparalleled and such a hate can only be squashed by The Spirit of God and God Himself.

Hail NOW to the coming of our Lord who WILL squash every demonic force who have stolen our Earth and it’s peace.  War for profit will be a thing of the past.

But first….Turkey will experience a wrath of God event.  So is the prediction by the leading of The Spirit….if it doesn’t happen this year, then it’s a misguided imagination by which Jazweeh will have to answer to.

The Original Article Prediction and Why

The prediction given here on 4-16-19 for 2019 in detail reads that Olu Deniz, Turkey and its other surrounding ritzi beach side resorts will incur a wrath of God event due to the slaughter of God’s people by the Ottoman empire.  Apparently the land was given to Christians by God and taken from them brutally.  Today the rich who own those resorts are the inheritors of the spoil with blood on their hands through generations.

I find it VERY interesting that The New York times just put out this article today 04-23-19 called “Turkey’s Killing Fields”.

This article is further confirmation to me as to why the wealthy of Turkey’s plunder and land crab of the 1920’s against Christians will be avenged by The Most High God, Creator of The Heaven’s and The Earth.

The article states “The fate of Assyrian Christians, of whom 250,000 or more may have perished, is also examined, in less detail.”

Bottom line: I don’t believe ANYTHING put out by the beast system from the new york times website.  Furthermore, they are harolding some book (I won’t mention) about the incidents of death of Christians no doubt so they can steal the narrative to their twisted advantage. “let no disaster go to waste” in the words of Hilary and other puppets on the image of the beast.

Bottom line after reading the article about the book at the link at top of page is this.

I am beginning to think that there is still and has always been a world wide international slaughter going on by somebody who hates true faith and is very powerful.  Come soon Lord of Lord, King of King’s….Please Come soon and set this world right as no human can.