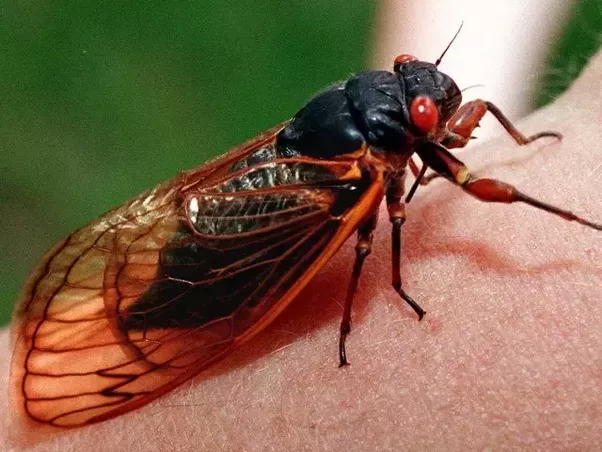 Jazweeh shared her dream/vision of the Locusts prophesied to come in Revelation 9 in end days.

The Scorpion type creature described in Rev. 9 is said to look like a horse with a scorpion tail, having long hair as a woman, a man’s face, breastplate, and yet it is called a “Locust” from the bottomless pit.  This description is confusing at best even though we have several artists renditions of it.   I don’t think they are accurate.  Or perhaps there will be different varieties of this wretched creature said to rise out of the abyss or bottomless pit.  The sting of it will make men suffer five long months.  The sting comes only to those who take the mark of the beast willingly.  The sting will not kill those who have the mark but rather induce torment.

There is a strange occurrence brothers and sisters.   The raptor takes the memories and morals of those with the creator on their heads.  But I have seen several Christians that have both the mark of the beast and the seal of God.  I realize this is strange, very strange. My take on it is this.

How can they have both The Seal of God & The Mark of the Fallen on their foreheads as some do?

The Christian believers who are both sealed of God & yet still have the mark of the beast on their foreheads still have a choice to make that will tether them finally to one side or the other. Since the mark and seal have gone out, and their heart is not ready to meet Jesus YET they have some lesson some choice, something to let go of apparently before the wings of the fallen falls from their head and they overcome the Raptor beast from the pit. This is why they don’t see the supernatural bible changes. Nor do they remember and see many of the signs and wonders. The great tribulation shall bring them the opportunity to get desperate enough to call upon God with a True heart that is no longer to be tethered to the beast system and whatever it is their heart mst let go of. Lets not judge them chosen few. You know how hard it is to let go of the beast and that the only way it can happen is with God’s help.

The inspired words of God are now leaving earth except in the hearts of God’s children do God’s words abide. Amos 8:11&12 Reveals this Truth, the prophecy for end times.  The wolf now rewrites the once Holy Bibles-one & all.  The strong delusion prevents Christians from remembering The Holy Bible as it once was.

Update continued.  Please read the article HERE on the mark of the beast and the Raptor from the Pits of Hell that has been conjured and is causing the division of minds (Mandela effects) as some see and some do not.  And its causing men to believe lies.

And remember if we don’t take the mark we won’t get the grievous sores also mentioned in Rev. 9.  The sores could come from having a lithium battery in one’s body.  This has already been addressed as a medical issue with R.F.I.D chips in effect today.  The man who developed the implants insisted they not use lithium however apparently his concern fell on deaf ears.

I think since these creatures were refereed to as “Locust” that they will swarm in groups as locust do.

Giant Cockroaches Attack those who have the “Mark”

Jazweeh had a vision dream in which she was attacked by one of the Locust from the bottomless pit.  I know not why but she said the Locust felt like a great Cockroach sucking upon her head like a leech.  It’s antenna was like the tail of a rat but two feet long.  (Update-seems I saw the rat tail of the Raptor even before I got the second vison of it.)

It went down like this.  Just before she went to bed she saw a roach in the house.  She has a superstition or intuition that squashing these creatures creates toxic invisible fumes and that its best to trap them on glue traps or spread white powder boric acid around the problem area so they go off and die somewhere else.  Roaches hate boric acid they walk through it and it kills them slowly.  I just read they also hate cedar and that cedar-wood essential oil repels them.

The Dream Vision of the Locust from the Pit

The roach had wings and was about three foot long.  It had sticky substance on it so it was able to attach to Jazweeh like super glue suction.  She could not get it off.  She felt the suction in the dream sticking to her.  Oh my God how horrible it must have felt!   Furthermore in the dream she killed the roach even though she knew in her thoughts that inside of it was lethal fumes.

Sounds absolutely horrible doesn’t it?  For some reason she was not petrified or even very scared at all in the dream.  Somehow God kept her from such fear.  She killed it with her bare hands.

When she woke she remembered the dream vividly.  She looked up cockroaches online and found that yes in fact, they do have a sticky substance on their feet shaped like suction cups that help them walk up vertical walls.  This was her confirmation as she did not know this fact about roaches.  She and I have always been disgusted by these ominous creatures.

DON’T TAKE THE MARK LEST YOU SUFFER HORRIBLY

One to buy and sell, the other supernatural appearing on the foreheads of men that invites the Raptor called the Locust from the pit.  This is why both forehead and right hand was mentioned in the bible before its fall.

The 09-24-2018 dream was disconcerting.  However Jazweeh previously asked God how she would face not taking the mark of the beast to buy and sell when threatened by starvation, homelessness, or death threats.  She knows in the natural she would succumb to the mark under great torture of massive threats.  She was given the dream, she believes, so when the mark comes around which by the way will be created by Zebra Technologies (see her vision regarding who will get the contract to mass produce the mark) that she would fear taking it more than the consequences of not taking it.

The consequences of taking the mark had to be real to her lest she rationalize, justify, and lie to herself just to stay comfortable and safe.  But that safety would be temporary if she were to take the mark. If we take the mark the sufferings will be far worse than if we don’t.  Believe it!

Why was the creature described as a locust, scorpion, and horse, with a man’s face in Revelation?  Perhaps there will be varieties and the horse creature is the leader of the locust with extra powers and armor.  When she woke she heard the words that “the cockroach is the locust written of in revelation.

The reason for her vision is so she WILL NOT TAKE THE MARK OF THE BEAST.  This is for her and I a graphic depiction of one horrible disadvantage for taking the mark even under the pressure of threats and exclusion from the money system.

“Pray you escape these horrible creatures and the end time worst scenario tribulation.”