(one of them –as the desecration of God’s words in bibles is also an abomination of the desolate type.  Amos 8:11 &12 “I will cause a famine on the earth not of food or drink but of hearing my words.  My words will no longer be found on Earth”).

I am guessing at what is to come for those with and for those without the mark on their forehead and the winged demon on their brain/head shown below.

“Then he shall confirm a covenant with many for one week;
But in the middle of the week
He shall bring an end to sacrifice and offering.
And on the wing of abominations shall be one who makes desolate,
Even until the consummation, which is determined,
Is poured out on the (poured out upon those who are to be made desolate) desolate.”   Desolate of what?  The knowledge of right from wrong and Truth.

The wing of abomination is a demon that has flown.  It makes desolate the minds of men.  Its second purpose is to mark men’s foreheads with the mark of the beast.  Being either a goat head/goat horns/or fallen angel wings with no head.

Bottom line the reverse of knowing good from evil is occurring.  The creature is the locust from the pit as prophesied.  Don’t worry, if you remember the bible the way it was or if you see the Mandela effects you likely do not have the creature of memory loss on your head (as shown below).  Honestly I do not know all the circumstances of who has the mark and who doesn’t because its a heart condition that only God can read.  I sure the armor of God helps protect you from the invisible demon creature.  The locust from the pit by which men are suffering but not like we pictured it…right?

The Visionary who is able to see both the mark of the beast and the demon of desolate minds upon the foreheads of men is not an artist. He did his best to draw what he sees. He has a gift of seeing into the spiritual realm by abstract shapes.

See the creature covering the face.  Scripture (new) says God will destroy this vail on all men at some point they will see again and know right from wrong.  The tree of the knowledge of good and evil. 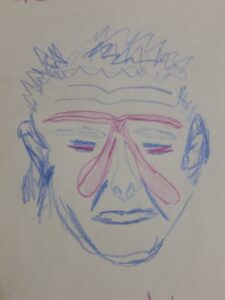 And he will destroy in this mountain the face of the covering cast over all people, and the vail that is spread over all nations.

This drawing was taken off youtube as the visionary watched the face/head of a woman with a strong spirit of defeat and depression.  The visionary has noticed that not just Christians are sporting the mark of the beast and the winged creature.

The strong delusion causes an inability to see and remember certain memories of one’s own history.  Also these do not know the personality of God and no longer seem to know right from wrong.

They have forgotten things such as what the bible used to say from 3 years ago and forward to what it says now.  These people with the winged creature showing on their head  are losing memories and being uploaded somehow with false memories that are lies.

When God mentions a strong delusion you can be certain its very very strong.  God is not sending out delusions.  Nor do we believe that He said  “I will choose their delusions” 2 Thess.  No for it is impossible for God to lie.  Jesus is The Truth.  A delusion is a lie send out by Satan or his demons.  This bible change that calls God a liar is an example of what those under the strong delusion easily believe.  A new gospel that is upside down and backwards.  Making God evil and Satan the happy camper with pizzazz.

See the mark of the beast on forehead.

The Tree of The Knowledge of Good and Evil

It seems by God’s will the people who ate from the tree of the knowledge of good and evil have abused that knowledge not properly dividing right from wrong.  And not allowing Truth to flourish in their heart.

They (by receiving knowledge of good and evil) had to show God they could be trusted with this great spiritual knowledge by relying on God Himself to fix their heart and guide them into making the right choices ultimately (not always) just when and where it counts.  Making their heart into alignment with God.  And to allow Love & Truth to rein in their heart, and to Love God before greed/lust/envy/bitterness and so on.

Seems that we are experiencing the open eyes to watch those who could not be trusted with the tree’s great knowledge of good and evil, watching them slowly yet abruptly return to ignorance as before Adam & Eve ate from the tree.  Right now the people with the creature on their heads resulting in memory loss and the mark of the beast on their forehead don’t know wrong from right or truth from lies in the Bible or otherwise.  But what’s coming for these— the blind.

Marked by the Wing of Abomination for Removal from Earth

There are two different “marks” on the forehead.  One is a beast the Goat w/horns.    And the other is the mark of the fallen angel wings.

Well it has come to my attention that they are being marked for a reason.  “Satan shall be removed from Earth” furthermore Earth shall be made new. They serve and prefer the lie so they have made it clear to God that they prefer delusion over Truth.  So delusion shall they have.

They along with all evil technology and garbage are marked for removal.  They are marked for a reason.  No they won’t all be going to “Hell” into eternal suffering.  No.  Most of them will go into stasis where they will experience life as the twilight zone time loop.  Their own personal Heaven over and over and over the same day will play out.  Until the 1,000 years of peace is done.  The chosen will inherit the Earth.  The meek shall inherit the Earth.

For 1,000 years there shall be peace with these others in stasis the elect will learn how to live in harmony with earth.  Perhaps God Himself raised the Georgia guide stones…perhaps.    Once those who respect Earth have learned how to live immortally and how to live without hurting Earth and living in deep flourishing presence of God like never before on Earth…then the bible’s prophecy of the “great multitude” will be allowed to return to Earth.

Hell and The Wicked, The Goat’s Who Side with Satan

As for those who have the mark of the goat on their forehead they are marked for Hell itself.  They are the wicked who prefer wickedness.  Not only were they deceived as the great multitude were deceived but they are the liars who have a heart to hurt others.  They are evil and hell is where they will fit in.  Its their home.  The great multitude are marked with the fallen angel wings on the forehead.  Whereas the goats, the wicked are marked with a goat’s horn or head with horns.

Seems, (I am guessing here) there will be a Raptor Rapture for those who have the creature on their heads.  There may still be hope for those in bondage under the strong delusion of lies and false history..

They hope so deeply for a rapture.  They may likely be snatched away as the new corrupt scripture reads. “removed abruptly” People I think its the great multitude and the wicked who will be raptured first.  I think we had it backwards.

Did God not tell us that “The meek shall inherit the Earth.”?  Yes He did so that scripture must fit somehow.  Who are the meek?

Would it be so bad to inherit the earth once its made new after God removes evil and Satan?  Its the same end…with immortality, paradise, new earth, abode of Love, God’s presence lighting the new Earth and so on say the prophesies.

I am sure at some point the elect will get to go to Heaven but we are needed here for the enjoyment of the 1,000 years of peace and then to teach either those who were deceived and now suffer from not knowing right from wrong. Who proclaim Jesus as their savior they even claim that they have The Holy Spirit.  Or perhaps also those who avoided all along religion.  Perhaps those who live by the golden rule alone shall be of those who inherit the Earth after the 1,000 years of the elect’s learning.

I spent years as a prodigal son deep in sin never losing Faith or Hope.  Praying always.  And The Holy Spirit was not taken from me.  By this I learned the depth of God’s Love & Grace for His children.  These the great multitude are not so wicked that they deserve Hell.  Or are we to think that our own level of forgiveness surpasses that of The Creator?

I suppose God is giving the great multitude a way by just believing in Him they are saved from Hell and eternal death.  So they just need more guidance to learn to Love & Truth.

I could be wrong but I think this is the plan.  That God shall prepare the chosen to teach and guide the great multitude who inherit the earth.

I thought I would be raptured first out of here and still that is my second guess as to what is going to occur by 2024.  I prayed “Thy will be done” instead of yearning to go to Heaven NOW.  Then I got all this new information after the “thy will be done” prayers.

After all God knows what I need better than I do.   That is already proven and tried.  So…onward with God’s Will in place we call Earth.

So as the knowledge of good and evil leaves many people they will be running on carnal impulse.  God help us.  The vast majority of people on earth will become like animals who live by carnal survival skills.  Kind of like vampires maybe.

More will be revealed.  But know this. The mark of the beast has already flown on the wing of abomination.  Jazweeh has seen it.  To her it is baffling to see those lifting up Jesus yet so deceived.  Bottom line we do not know who is saved and who isn’t.  We only know that God has revealed to the chosen who they are.  And we believe we are in for a journey to Heaven and back for some kind of teaching and upgrade.