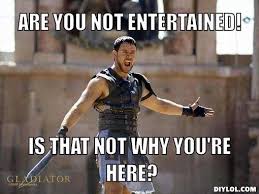 My special blessed Ladies and Gentlemen,

Also my thoughts on the beast system and addiction

Short message to let you know what Jazweeh’s latest vision has shown her.  I Laura E. watched a video on YT of a guy sharing a dream. He dreamed of a coliseum where people had to run desperately around and around as they were shot at by spectators in the arena.  Think Gladiator movie setting.  This was a confirmation to me of what Jazweeh had previously told me she saw of the future.

The stage is already set in stone in many countries.  We have massive coliseums already in place especially in the United States.

In jazweeh’s vision these stadiums will be converted to coliseums for the masses where new games will be presented.  However it won’t be football or baseball or even concerts. It will be blood thirsty public participation arenas just as we saw in the movie gladiator.  PEOPLE WILL DIE AND THE MASSES WILL CHEER.   There will be all manor of different blood shed based games.  Slavery will be full blown.  There will be a separation of those who are deemed “free fellow” and those who are deemed “social disadent”.

The bases of your social title will be by the mark of the beast.  The colosseum and its violent, brutal entertainment will be one way the beast system rids society of Christians and those who will not take the RFID implant “mark of the beast”.

Movies like Gladiator and other violent blood letting type movies are preparing people for their next mind controlling program and how they will act based on social status quos.  People are already programmed so easily by the beast system with status quos.  The beast decides what to make “kool” and what will be “unkool” by TV programming which programs humans on how they should act. Again first you must be programmed with the “I am bad and wrong” programming so you will be vulnerable to uptake a new identity.  This new identity is based in shame of who we really are so we put on the mask.  Most people will NEVER realize this.  Most people will never become who they really are by following their own heart and the leading of God.

Even in AA those who change dramatically on the most part have only downloaded a new “recovery program” to their brains.  They have left their true heart and true identity buried under a pile of shame.  The only way to find your true self is by returning to your first emotional traumas and processing them with open eyes and open heart.  The rebuilding self worth must take place on the bases of that wounded child.

However most AAers won’t go there.  They label addiction a “disease” & call it “cunning, powerful, and baffling” they exalt the beast, therefore they are never required to find the true reason for their self loathing or their foundation of shame.  If you ask them why they became an addict, they will quote the Big Book saying “self centeredness  I have watched as people swear in AA that they had a wonderful childhood, never realizing what has happened to their true identity.  I myself did that same thing, I swore there was no apparent reason for my addiction.  I was relieved to find others like me, and to copy and paste the standard reason for addiction as my own.  After all “different is bad” and to copy and follow the rest of the sheeple is good right?  (sarcasm).

“Our liquor was but a symptom. So we had to get down to causes and conditions”
“So our troubles, we think, are basically of our own making. They arise out of
ourselves, and the alcoholic is an extreme example of self-will run riot, though he
usually doesn’t think so”  Most addicts NEVER know why they REALLY BECAME AND ADDICT.  Endlessly you will hear them share how they felt “lesser than” but they don’t go any deeper to discover WHY they were programmed at heart level with inferiority and shame.

And you know what, I should not judge the even though when I post truths like this in the addiction social networking sites I get kicked out, my posts get deleted, and they call me “a danger to newcomers” because I claim addiction is NO LONGER CUNNING AND BAFFLING.  It just plain sets of their defense mode and they hate my words.

The beast system has done its job very well as we live in the land of the sleeping and blind. Read “How to become who you really are”. 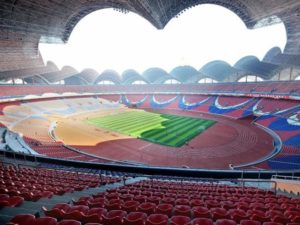 People, at recoveryfarmhouse.net and .com I have endless articles on how to recover from the beast system in the genre of addiction.  Its the same for addicts as it is for none addicts.  To connect with true self takes takes a miracle & seven years of work in 12 step reprogramming.  That’s right, or a miracle.

Again, Jazweeh emphatically reminds me of the consequences for taking the mark of the beast.

THOSE WHO TAKE THE MARK OF THE BEAST by RFID CHIP (radio frequency Identification) which is the chip that will allow a man to buy and sell, placed on this right hand or in his forehead will be changed at the most basic level of their being.

Those who take the mark will have a CRISPR splice placed into their DNA by which beast DNA will be added.  Some kind of ferocious bloodthirsty killer DNA will be spliced into the human DNA which will render the person evil, blasphemous, and carnal to the core.  All God based consciousness will be eradicated.  They will be the sons of Saton Himself once they take his DNA into themselves.  Their DNA will never be the same.   Any children they have will be reprobate IF they can reproduce at all which is doubtful.

Know this, God is sending end times dreams and visions to His special children to warn them of the dangers of taking the mark.  I myself have had Locust Dream and other warning dreams that have prompted me to fear the mark.  I felt the locust sucking and sticking to my face.  It was absolutely disgusting.  The dream was horribly real enough to make me fear the mark more than death itself.

God is sending dreams to us that make us fear the mark more than death or beheading. He is a Loving Father who will not leave us ignorant of Saton’s (middle English means Satan) plan.

God is providing for us “a way out” as Apostle Paul warned us that we would have.  “God will not press us beyond measure but rather in our temptation He WILL give us a way out”.  Scripture paraphrased by memory.