“The Good Doctor” on NetFlix the Net.

What do Nets do?  Catch things.

I cannot find any excellent images from the show the good doctor that make OBVIOUS the actor is Artificial Intelligence but if you watch the show, watch out!  Learn of predictive programming so your mind is your own.  Also be certain that you know the motives behind TV Programming to program you.  LOOK at the images below with NEW EYES.  Don’t believe ANYTHING THE BOX SPITS OUT AS TRUTH.

“And this is the condemnation, (did not say condemnation its a change) that light is come into the world, and men loved darkness rather than light, because their deeds were evil.”

I walked into my husbands bedroom where he watched “The Good Doctor” on ABC.  I used to watch Bates motel and other shows religiously until my awakening.  Since I have detoxed from syn-dicated TV sin tv I recognized right away what my spirit had been trying to tell me all along, The star of the show named Freddie Highmore is NOT A HUMAN.

I gasped when the revelation hit me watching the pale mechanical actor mimmick his lines on the TV screen.  My husband was angry at what I said. “he is AI look at him”!  My husband said “your picking apart my program”…..programming he should of said..  He had added, “I saw him on an interview he was NOTHING like he is on the TV show”.  I told him..”that’s probably because it was NOT him in the interview who is on the TV show”.  Meaning TV actor=AI Interviewee=Human.

Well this idea nearly crushed the delusion for my husband and ripped at the fantasy that is so comfortable and restful for him.  Many of the truths I have proclaimed to him have angered him.  It has come to the point that he has demanded I not talk about certain topics.  Whatever I can’t make him look.

I get it….apparently “HE PREFERS THE LIE” over Truth.   For those of you who are awake and live with those asleep….its hard but understand they just want to be comfortable.  And if its a lie that comforts them they will take it.

Freddie (red dred die died) Highmore….decoded “More High” more high than what I ask?  More high than the Most High of course the robot is a mockery of mankind, Satan’s own creation his copycat of what God created.  After all Satan wants to be God and AI is his new vessel for demons we think.  So they name their AI actor and their several other human actors that the AI is modeled after as name to mock God.  They must have real humans to go on interviews and other human interaction shows that AI cannot yet handle or understand. AI would be outed without the human actors to pick up the slack. 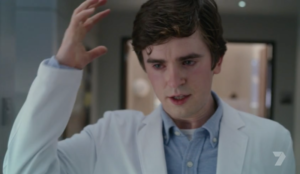 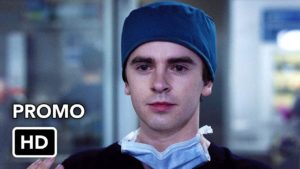 Look how different the human actors look who pretend to be this AI star of Bates Hotel and The Good Doctor.  Which by the way is programming YOU to Love AI and be used to the way AI acts that is IF your not aware of what you are watching and how predictive programming works. 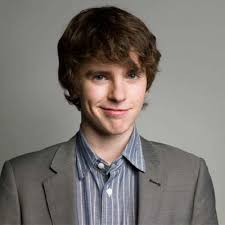 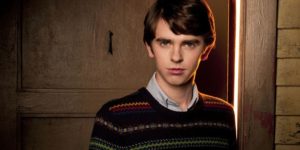 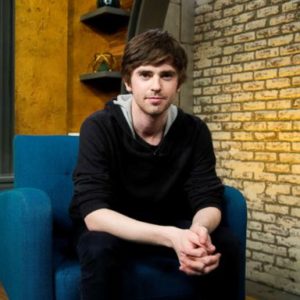 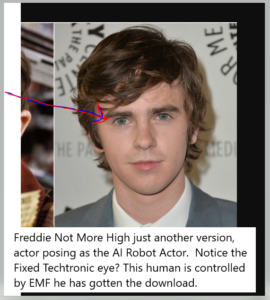 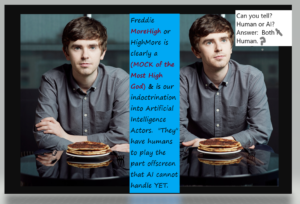 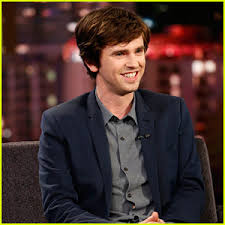