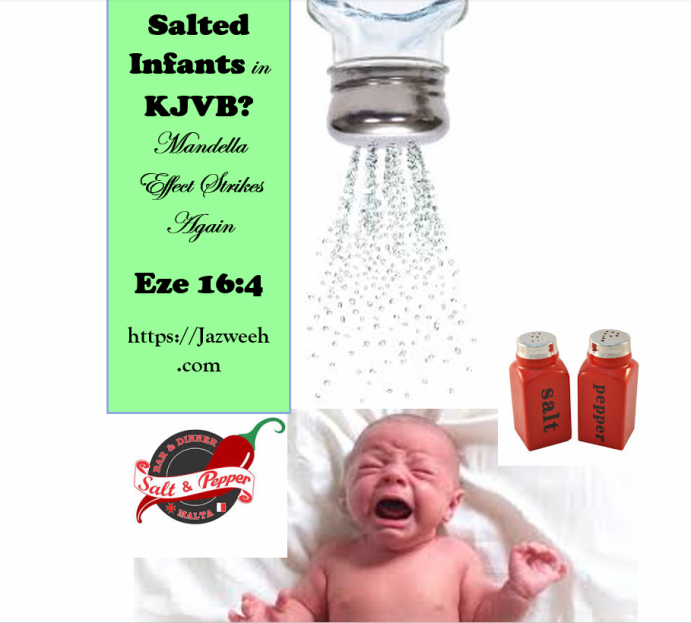 I will try to explain what I have seen and been shown this night.

I have grappled to in my spirit and mind to understand the strong delusion and the Mandela effects.

If you know the KJVB changes and see the blasphemy of the wolf’s voice coming through the pages of the book then you see much.  See EYA on youtube for reference to this split in reality, a very dividing of time.

“The Good Shepard’s Sheep Know His Voice”.  Prophecy fulfilled.  The wolf is standing and speaking in the Holy place, the once holy book. Our holy place not their holy place.

(Or is a temple of antichrist built by unbelievers to be considered holy to Christians?  You decide.)

Perhaps the naysayers are right, perhaps we, the minority who say the book is now vile, are the one’s who are blind.  Maybe Jesus always said “hate your family”.  Perhaps the figs really are “naughty”.  Perhaps fleshpots and wizards that peep really are a thing.  Maybe the wagging of the head, the mincing of the feet and the tinkling as you go was always in the book and should be considered spiritual wisdom…perhaps.

Or perhaps the prophecy of men turning to fables and the script pre M.E. in Amos 8:11 &12 of Father removing all His words from Earth is being fulfilled as I write.  Make no mistake, by your spiritual armor or the lack thereof you have chosen what you will believe and whom ye shall serve.  Do I sound Coptic believing in such miracles?  Cryptic perhaps by my dark warnings?

I saw a very large angelic looking demon with a pig nose and female looking body sent forth a great breath and she blew to the North. When she did a wall of demons appeared above earth.

These dark demons appeared as wolves, men in black top hats, and various other demonic entities comprising a great cloud of demon wall.  They are the strong delusion that has lulled most people who do not Love The Truth into spiritual darkness. The demons have blinded the men of earth and put them into a deceived state much like sleep.   Mankind believes what the media tells them because of these deceiving spirits.   Mankind doesn’t look at the skies to see the new stars, the horizontal moon (smiley face moon) and cannot see the signs and wonders or Mandela effects because of the demon cloud.

The demons have also spread the strong delusion over professed Christians who idolize the KJVB while dropping their protective belt of Truth to the floor.

By their spiritual blindness and 24/7 wifi immersion the masses are being downloaded with new false memories of lies and more lies.  Their future & past are being deposited into their minds like a man downloads by wifi a program into a computer.  I know it is demonic but it may also have carnal mechanical devices included by which men forget.

Many of the syfy events that truthers on youtube profess as “soon to come” are already upon the men of earth. How would you know if your being downloaded with false memories?  How do I know that many are?

We know that many do not see the past memories & public history as we see it.  Their history has been changed in their memories.  Hence “Madella Effects”.  People remember history differently  than the masses remember it.  There are thousands of Mandela effects that I see over and over.  I do not have to search for them they are obvious.  I don’t need proof I have already been given plenty.  The KJVB supernatural changes are my most important Mandela effects.  And they are ongoing.  While most Christians, Bible scholars, Novice readers, and learned preachers swear the book is “same as it ever was, same as it ever was”.    To me the book is already 70% changed, all of them, all KJVB.   Granted all bibles are changing but the KJV is the one I have studied at length for many years.

Back to my Prophetic Visions

I saw the great black flying pig bat that marks men’s foreheads with the mark of the beast when they have already made their choice.

But there are worse things that you must now see and be told.  All the above visions have already come to pass.

I saw another demon wall that has not been loosed upon earth but will be very soon.  The demons in it were of a much darker variety.  Much bigger, darker, uglier, much more abrupt, stronger, and their intent is much more vile.

The next wall of demons to be continued.