By quoting “get thee behind m*e* Satan” they invite Satan to their backside.  Vulnerably and unable to see what he is up to.  Why invite him and his demons to our back?

This is just another example of curses we put on ourselves due to listening to the Beast System at large.

Common Sense says bind Satan & his minions all together!

Do you worship the book or God….so why are some of you calling me the Antichrist because I see the changes in the KJVB?  NO “get thee behind me Satan” is not a recent KJVB change but I submit to you humbly that it IS a corrupt version of what Jesus meant and said originally pertaining to the annihilation of demons.

Bind Satan’s power from around you ALL TOGETHER…don’t grant Satan and his minions permission to stand behind you where you cannot SEE them, where you cannot easily fight them, and where they have access to your ears & your vulnerable back side whispering horrible destructive ideas into your head 24/7.  Does the familiar “get thee behind me Satan” really sound like a good idea?

We simply MUST regard God & Truth over the book that is corrupt, failing, and changed dramatically by on-going supernatural changes to every KJVB we know of.  Including hundred year old bibles that say “wolf & lamb” lying together along with Abraham throwing a “bottle of water” no less on Elizabeth’s back…really?  What happened to the wineskins people?  But the bible changes KJV is really a whole other topic.  See EYA on YouTube for details. 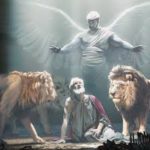 Once I got a deliverance from near relapse into addiction.  When the preacher prayed for me I literally saw and felt that preacher cast away a demonic forces that was just above my head like a cloud.  Where it was harping day and night reminding me over and over that “I need drugs”, I won’t be happy till I do drugs, and the damn voice won’t stop until, yes, until I do drugs IT would say.

Folks that preacher cast that demon off me and Jesus in a vision put his hand up toward a man looking figure cloaked in black and the hand told that high level demon “you cannot touch her!  she is MINE”

The demon was called “Obsession compulsion” to us humans.  There is little difference between having one above your head as I did then or having one at your back as so many have INVITED, INVITED Satan to their back by this scripture CURSE.

When my preacher prayed by the laying on of hands the demon oppression compulsion had to leave HAD TO LEAVE.

Also see the rest of the vision I had sitting in that church just before the preacher called me to the front for prayer.  This preacher singled me out of a crowd just as I had seen a vision of Jesus twirling me around as a child..we were dressed in light blue and white.  Then the dark figure walked toward us.

What is weird is that the figure had the gull to walk toward me right in front of Jesus as if, Jesus does not protect everyone.  You must accept Him and request His protection.  Then God Himself will give you the powers of healing and deliverance that Jesus had.  Those same powers that the preacher had for deliverance in some form anyway.

Wait!  You may say its too damn scary to believe in monsters (demons) and its too much trouble to wage spiritual warfare. Yes that’s what I used to say while being greatly oppressed and down trodden spiritually troubled by numerous demonic attacks and indwelling.

Then to add insult to injury I realize saying “Get thee behind me Satan” is REALLY an invitation.  WORDS MATTER FOLKS.  Don’t tell me “oh God knows what I mean.”  Bullshit!

The scripture is a curse that invites Satan to your back, having access to your ears and where you cannot see him to bind him.  You will believe your just SICK.  And partly yes evil does make us SICK emotionally and spiritually if we do not OVERCOME it abruptly, now.

In Alcoholics Anonymous we have a saying, “you cannot fight a spiritual malady with carnal weapons” or something like that…and its true.

I accept Jesus and His plan of salvation.  Please cleanse my heart Father. I repent of all evil I have committed.

I renounce the words I said in ignorance “get thee behind me Satan” and I replace those words in the name of Jesus with these true words of deliverance and freedom by the authority God has promised me in Jesus name:

“Satan I bind you eternally from my personage in every way in Jesus name, get thee away from me lest Jesus Himself put you in a box of bright chains of wrath & glory before your time has come.  I refuse the presence of Satan and/or any of his servants.  Flee from me NOW and for ever more all evil I rebuke you in the name of Jesus.   I renounce and slaughter every demon that haunted and antagonized me ever& hereafter.

I wrap & bind these haunting and taunting mocking lower spirits with BINDING CHAINS OF GLORY that no man or demon can break.  Furthermore,  I call upon my angel of light to take those colored chains of rage, glory and wrath and bind every mocking and oppressive demon that comes near me for all time & after.  Let the wind be at my back and the light of Jesus guide all my paths & ways.  Deliver me oh Lord from the Beast and its system.  Encircle me now oh Lord with a barrier or protection, of golden hew energy of spirit.  The gold be a weapon of war that when any demon even see or touch that barrier it WILL BE MADE ASH AND SENT BACK TO THE ABYSS & HELL.  All this I COMMAND IN THE MIGHTY NAME OF JESUS my Lord & Savior for all of eternity and thereafter.”  Amen and Amen