Making Men’s Mind’s Desolate & the Consummation of The Beast to Mankind.  A Smile from a Vail.

“And he shall confirm the covenant with many for one week: and in the midst of the week he shall cause the sacrifice and the oblation to cease, and for the overspreading of abominations he shall make it desolate, even until the consummation, and that determined shall be poured upon the desolate.”
The preacher who quoted this verse 9:27 in Daniel changed the meaning of consummation to “consume”.  As most Christians have to do, they change the English language definitions themselves to fit the twisted bibles to make some semblance of logical sense.
Not all of the wolf’s new scriptures are lies.
I had no idea this new scripture was in the book.  Matching my visions of the creature on the faces of the many.

And he will destroy in this mountain the face of the covering cast over all people, and the vail that is spread over all nations.
Jazweeh has seen the con-sume-mation manifestation.  A demonic creature that joins with mankind.
Lots of “consuming” going on in the books (bibles) now.  But a consummation is a joining together.  We know this.  Such as consummating a marriage by having sex. It finalizes that the two are now ONE.
It means a con, a Joining, and it consumes men’s minds making them desolate of good sense & godly wisdom.
Miraculously, I got a confirmation on this creature that I see without asking for one.  The confirmation of the mark of the beast and the consummation by the youtube channel “Tribulation Now” with Johnathan Kleck.
One of Johnathan’s subs sent him a drawing of the creature on his head.  Another 144 (no doubt) sent the drawing to him as a warning.  You see, the elect can see the mark of the beast on men and woman.  Though with woman its much harder to see.  But that will change in time.
We also see the wing of abomination that has flown & landed.  It creates the mark when it lands and suctions upon the face or head of the man it controls.
Does emf have anything to do with this creature?  Likely, the quantum computers could be the thing programming the creatures to download the mind’s of men with false memories, and lies from the pit of Hell.
The creature in the drawing sent to Kleck, (that by the way, looks very much like the creature in Jazweeh’s drawings) is shown in video at bottom of page, on his head along with a dead lamb that the visionary also must have seen and was lead to draw and send in to Kleck.  I hope my writing is clear.
Personally I see no use in telling these men that they are blind.  Its like trying to tell a blind man how to see red.  They cannot.  Still the man, the 144 was lead to send the drawing and by it me and likely many other 144 got their confirmation.
Strange I have never been able to draw 3d but now somehow my eyes see to draw better, much better than my old stick-people art. This ability happened some time around 2013.  Strange.
So Jazweeh & I are not the only one’s lead to draw the creature abomination of consummation on the faces and heads of mankind.
The consummation is widely connected to the mark of the beast and I believe it may be the locust from the pit from Revelation.
I call the creature (invisible to most eyes) ‘The Raptor’.  Because that is what it looks like to me.  A small soup bowl size Raptor.
Below are Jazweeh’s drawings of the abomination of consummation of the beast making mankind’s minds desolation of Love & Godly Knowledge.  Look at the similarities of the head-part (triangle shape) that lies right between the eyebrows, to the other photos on the head.

And he will destroy in this mountain the face of the covering cast over all people, and the vail that is spread over all nations.

Apparently Jazweeh & I are not the only ones who see the mark.  Two of Jonathan Kleck’s subscribers (youtube) sent him photos of the creature on Kleck’s head along with a dead lamb.  Kleck reasoned out “they sent me this drawing because I am hunted!” He said with great fervor.  I can only imagine what the 144/elect who drew and sent it actually told Kleck.  Nevertheless denial is the go-to emotional key hole for all self deceived by which they comfort themselves.  Truth….is too scary and way too much work to believe.

The Raptor drawing sent to Kleck looks identical to the one I have seen. And those who have the creature on their face or head also have the mark of the beast on their foreheads.  Its attached, it is one, the mark and the beast are one.

This photo of the hand tatoo below looks like the beast that camps out on the faces as it feeds lies to it’s host, both past and present information uploaded to the wearer.  Those people like “Quantum of Conscience” who don’t seem to have the mark & who see the odd behavior in men yet don’t see the creature or mark call it “The Download” when people act desolate of mind being out of character, abynormal.

There is still time to get real with God but not long.   Jesus is The Truth, The Way, And The Life/Light. 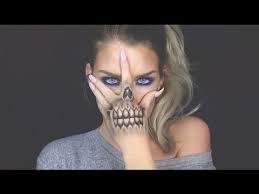 Search “hand to face tatoos” to see the disgusting tatoos.  These people have no clue they are being controlled by a demon.  They are relishing & celebrating the beast that has their heart and soul. 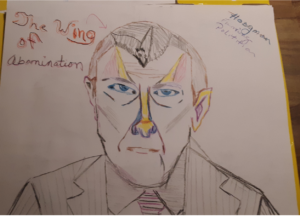 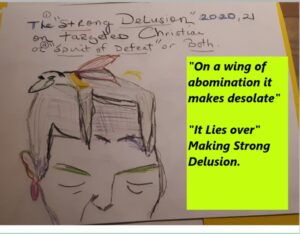 Below is the theJonathanKleck you tube channel video.  He holds up the pictures of himself that subs sent him with the creature/raptor and also a dead sheep on his head. He says they drew it because he is “hunted”.  I suppose they drew it and sent it to him because they also are seeing these raptors and the mark on heads of men.(and women)  He even mentioned the “raptor” I was shocked and validated.