SEE ORIGINAL ARTICLE THANKS TO PECKFORD42.WORPRESS.COM

Even with the COVID-19 shots, the estimated total vaccines administered so far this year is less than the yearly average–because we are only a quarter of the way through this year. No doubt the vaccine count will climb much higher by the end of this year, but it’s not the reason for the massive increase in VAERS death reports over the last 4 months. 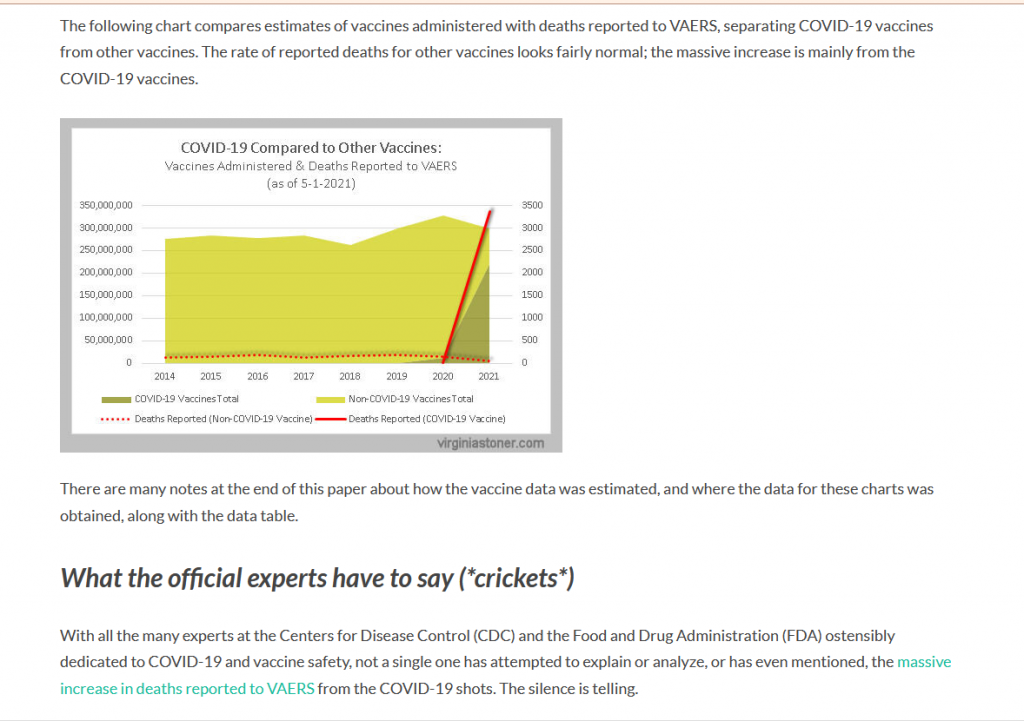 But it’s not as if VAERS death reports are being hidden, exactly. VAERS data is freely available to the public…and if you don’t want to look it up, you can follow the CDC’s COVID-19 Vaccine Death Count online, which is updated regularly. Just scroll down to the section called “Reports of death after COVID-19 vaccination” for the latest numbers. Most recently, the death count went from 2794 on April 5, to 3005 on April 12, to 3848 on April 26. But a mere 1054 deaths in 21 days is no problem for the CDC—it probably just means the vaccines are working.

I found only one paper (1) that mentioned VAERS death reports re COVID-19 vaccines. The lead author was Julianne Gee, from the CDC’s COVID-19 Response Team, and the paper concerned safety monitoring during the first month (December 14 to January 13). We are told, in the Summary:

The authors said 113 deaths were reported to VAERS that month from the COVID-19 vaccines. Incredibly, they never compared that number to historical VAERS averages or trends…just kidding. Of course they compared it, realized it was shockingly higher than the historical average of 12 deaths per month, and decided not to mention it. Never let science interfere with good vaccine marketing.

Bizarrely, the authors actually implied the number of VAERS death reports indicated a safe vaccine, because a lot fewer deaths were reported to VAERS than they would have expected to see coincidentally among people who got the vaccine. Do you think that makes sense? I hope you said “no,” because it does not make sense. You can’t conclude a vaccine is safe because fewer people filed VAERS death reports than were expected to die coincidentally. I can’t even explain it in a way that makes sense—because it’s NONSENSE.

They were going to die anyway…someday

One hypothesis I’ve heard, and which is hinted at by Gee, et.al. in the paper above, is that the elderly and infirm, many in long-term care facilities, were the first to be targeted by the COVID-19 vaccine campaign, and they are much more likely to die coincidentally. These coincidental deaths then lead to an increase in suspected vaccine-induced deaths reported to VAERS.  (*cough*)

VAERS data just does not support that hypothesis. First, because all age groups—not just seniors—had a dramatic increase in VAERS death reports from COVID-19 vaccines, as illustrated in the charts below. The red line represents reported COVID-19 vaccine deaths, and the green line represents other vaccines. Across the board, all age groups experienced a dramatic increase in deaths reported to VAERS from the COVID-19 shots—even the under 18 group, which has had very few COVID-19 shots (so far).

Second, the increase in death reports in the 65+ age group is just so massive that coincidental death, no matter how sickly the population, just doesn’t seem like a sufficient and plausible explanation. After all, the elderly and infirm in long-term care facilities are frequent targets of flu shot campaigns.

What does VAERS, and the people who tend to it, do all day?

Given the massive increase in deaths reported to VAERS—not a modest increase, but an enormous, unprecedented increase—it’s unfathomable that VAERS would not detect “disproportional” reporting, thus putting the wheels in motion to study the situation “in more robust data systems.” But there is no indication anything like that has occurred.

According to the CDC:

“VAERS has not detected patterns in cause of death that would indicate a safety problem with COVID-19 vaccines.”

Even as the death reports continue to roll in at an astonishing rate, by the dozens and sometimes hundreds per week, in true Orwellian fashion, the CDC simply updates the Death Count on its website and reiterates:

“VAERS has not detected patterns in cause of death that would indicate a safety problem with COVID-19 vaccines.”

And, of course, the old standby reassurance:

“COVID-19 vaccines are safe and effective.”

The only way it seems possible that VAERS did not detect any safety concerns, is if VAERS was actually programmed to expect a very high rate of deaths from the COVID-19 vaccines—much higher than the rate of deaths expected for other vaccines. That would explain why VAERS did not detect any “adverse event-vaccine pairs reported at least twice as frequently as expected for a COVID-19 vaccine…”

On the other hand, maybe people are just lying, and VAERS is either doing nothing at all, or something other than what we’re being told; or, it is detecting possible safety concerns with the COVID-19 vaccines like crazy, and it’s being covered up.

But, hey—never let it be said I don’t have an open mind. Maybe one of the many highly paid and respected experts at the CDC will do an analysis—like my humble analysis here, but bigger and fancier with more bells and whistles, because they are experts—and prove the massive increase in VAERS death reports has nothing to do with dangerous COVID-19 vaccines. But I won’t be holding my breath. I think if that could be done, it would have been done already—in triplicate.

Queen of Light took her bow
And then she turned to go,
The Prince of Peace embraced the gloom
And walked the night alone.
Oh, dance in the dark of night,
Sing to the morn-ing light.
The dark Lord rides in force tonight
And time will tell us all.
Oh, throw down your plow and hoe,
Rest not to lock your homes.
Side by side we wait the might
Of the darkest of them all.
I hear the horses’ thunder (four horsemen pale horse now green m.e.)
Down in the valley below,
I’m waiting for the angels of Avalon,
Waiting for the eastern glow.
The apples of the valley hold
The seeds of happiness,
The ground is rich from tender care,
Repay, do not forget, no, no.
Oh, dance in the dark of night,
Sing to the morning light.
The apples turn to brown and black,
The tyrant’s face is red.
Oh the war is common cry,
Pick up you swords and fly.
The sky is filled with good and bad
That mortals never know.
Oh, well, the night is long
The beads of time pass slow,
Tired eyes on the sunrise,
Waiting for the eastern glow.
The pain of war cannot exceed
The woe of aftermath,
The drums will shake the castle wall,
The ringwraiths ride in black, (See The Lord of The Rings trilogy)
Ride on.
Sing as you raise your bow,
Shoot straighter than before.
No comfort has the fire at night
That lights the face so cold.
Oh dance in the dark of night,
Sing to the mornin’ light.
The magic runes are writ in gold
To bring the balance back.
Bring it back.
At last the sun is shining,
The clouds of blue roll by,
With flames from the dragon of darkness
The sunlight blinds his eyes.
Oh, bring it back, bring it back…