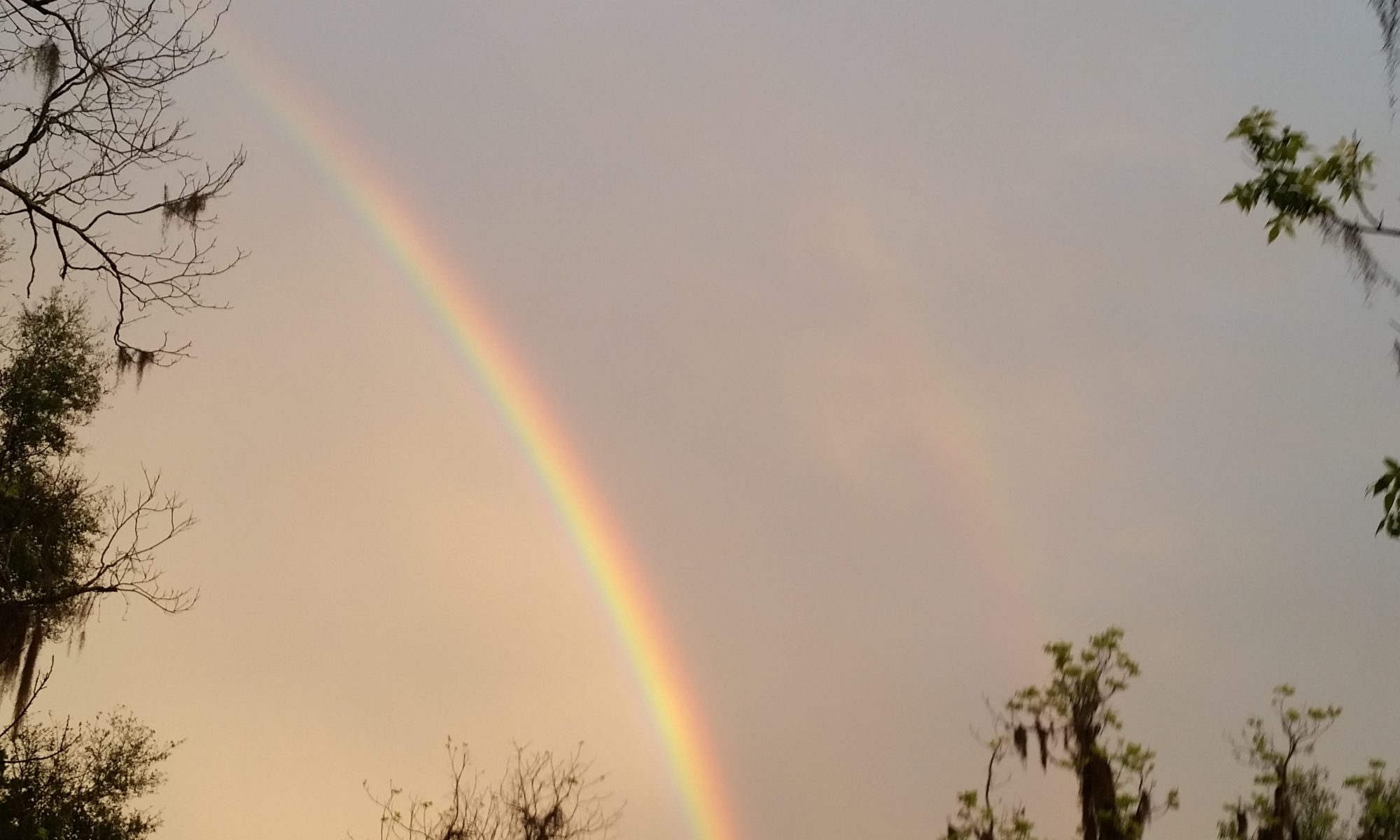 I Saw The Fake Rapture and it Nearly had me Fooled

Children of The Holy Spirit

Those who say the rainbow meanssss rapture are likely deceived or actors. But hey, I could be wrong.

Be NOT DECEIVED BY METALLIC HOLOGRAMS MADE BY MEN THAT ARE GREAT, COLORFUL, AND EVEN SCAREY.  God does not use the technology of men to accomplish His spiritual works.  Be ye NOT deceived by the fake rapture of a hologram and a post to your phone weather photo or text that says in one way or another “you missed the rapture YOUR NOT WORTHY”.

The Beast is the author of confusion and deception, the father of lies.

The Beast uses technology and frequencies. He is the prince of the power of the air….waves.

I find it interesting that the metallic rainbow showed up in my yard just 2 days after Trump (the last Trump?) signed a bill to receive billions 738 approx. for a space force with no explanation of what they will do with that money.  Seems the debaucheries of men know no bounds of control issues.  Furthermore space force is already recruiting men from army, navy, marines etc.

Seems the debaucheries of men know no bounds concerning the slaughter and brutality toward the innocent.

You know God’s Holy Spirit do you not?  You know His Spirit and that is why you long to be with Him!  We long for Jesus because we have felt His Love and want more of Him. We long for the rapture because Jesus has shown us that it is coming soon, that He is coming soon.  All of His children are now abated in Him as we watch and wait.  We are poised for the rapture.

When I asked Father if I missed the rapture He said this,

“Not by might nor by power but by My Spirit” Sayeth The Lord.

I Saw the Fake Rapture and I heard “Write tell, so my elect are NOT deceived by this so great a deception”.

I walked out my door and when I stepped down the steps the rainbow hit me right between the eyes.  NEVER have I seen a METALLIC rainbow.  And NEVER ever has a rainbow been directly in my front yard so close I could almost touch it.  I literally screamed in shock.

My first thought was this is a sign and wonder so…I must get a photo of this for an article to show God’s children.   I ran into the house and grabbed the phone.  When I came back out it wasn’t quite as close or as bright.  The camera just didn’t capture the severity of it friends.  Friends this photo doesn’t capture how close it was and what it looked like.  Know this, it was a grand sight that made me scream of shock. 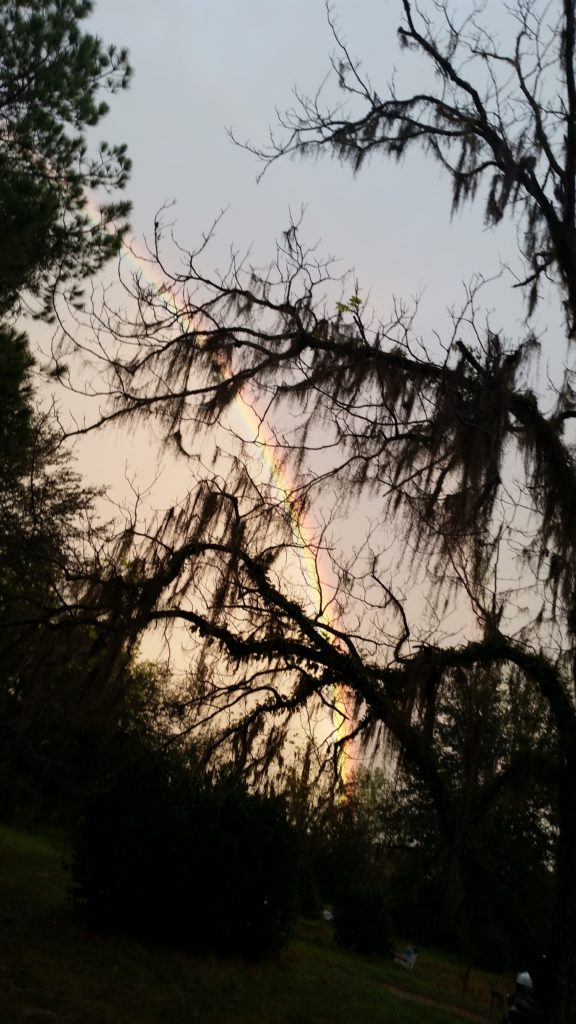 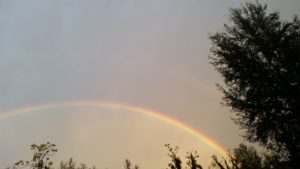 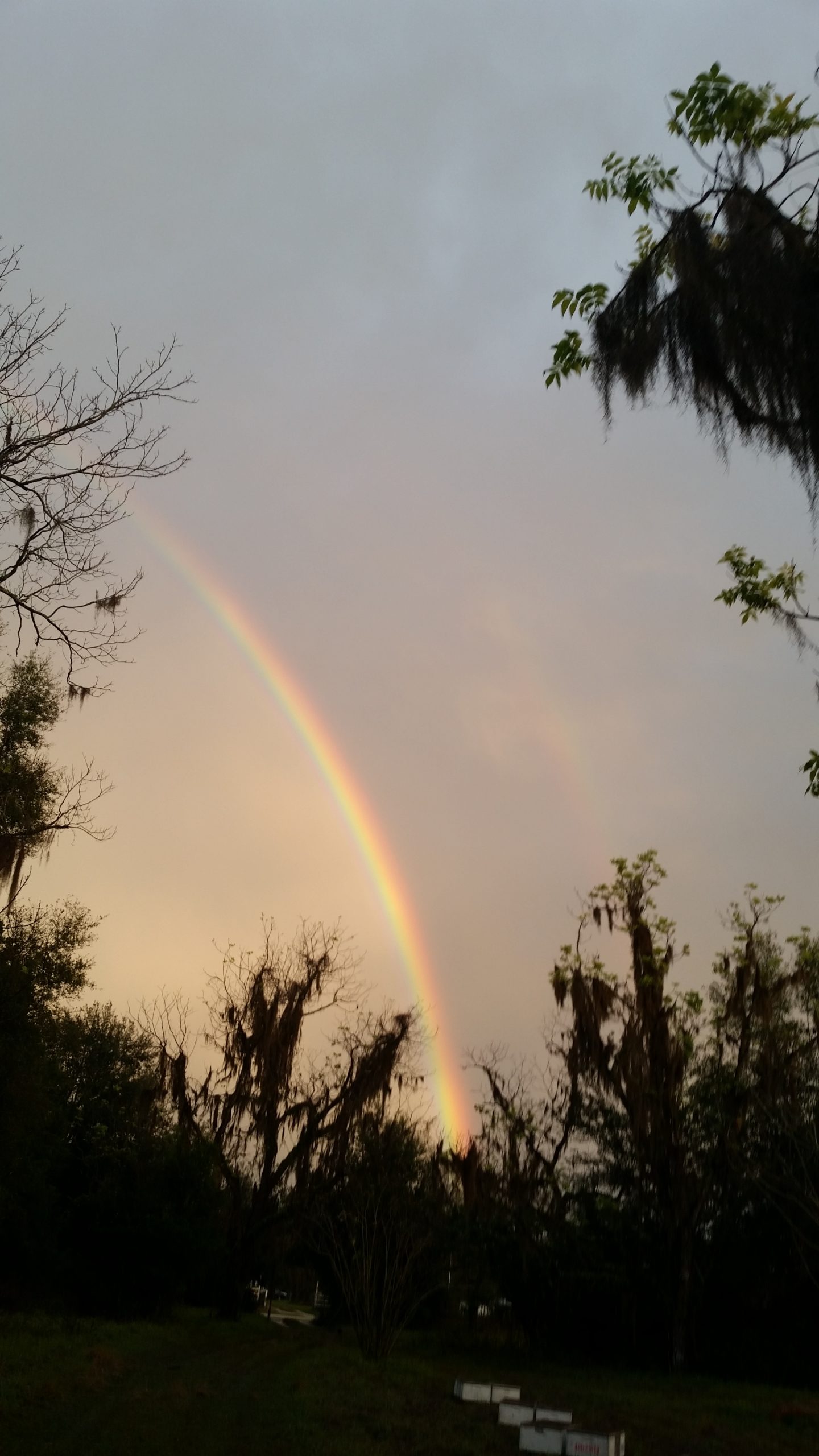 But then I looked at the phone and there was a photo that I did not remember taking.  I saw the photo and gasped!  It was an image of a funnel of some dimensional door similar to one I have seen before during a spiritual experience travelling out of body.  It was a photo of a wormhole but I did not take it, or did it?  Perhaps it was one of the photos I took but it was for some reason distorted.  Maybe it shown some man made frequencies.

Or, Did I just miss the rapture because I wanted to take a picture of the metallic huge seemingly magnificent rainbow?

Again I felt horrible remorse and a pitiful feeling that I had just screwed up beyond repentance.   That I was bad, wrong, and could not be redeemed into the rapture.  I had gone back into the house to get the phone…I was fu**ed.

Suddenly the supposed prophecy videos came to mind…they said “rainbow represents rapture”  they said “when the rapture happens you will see a rainbow”.  Omg! I huge feeling of regret came over me again..I saw the rainbow, I saw the funnel on my phone, I wanted to fall to my knees and beg God “did I miss the rapture because I wanted to take a photo of a rainbow?”  Instead I stood and prayed as my heart fell to my knees.

You Have NOT missed the Rapture

If it were possible the beast would deceive even the very elect.  But the elect hear God and know His Spirit. Had that been the rapture I would not have gone back into the house.  I would have felt the presence of Jesus and been drawn toward Him instead of screaming with surprise at a metallic rainbow showing in dark clouds instead of a blue sky and then running away from it.  We Love Jesus, we run toward him.

Would God use the beast’s tech?  Maybe.  But the photo came through on the technology.  The technology is the voice and image of the beast.  That’s another tell.  I don’t trust the phone saying to me “this is God showing you that you missed the boat,  missed the call,  missed the rapture cause I went to get the camera.

If that was the rapture and I can’t even feel God’s Spirit, then I say destroy me utterly because I do not want to live if I cannot be with My Father.  Furthermore If I am not worthy of God’s world even by His Grace, then I should not be there anyway and again should be destroyed utterly.  I want no part of Satan’s world.

Understandably, with all my “I am bad and wrong” programming since birth I was not convinced of my innocence. I was so upset I could not listen to the still small voice….for a moment.. but then I heard the scripture written on my heart,

Jesus said my name and know this people, God doesn’t call us “child/son/daughter/etc” God knows our names people.  Its a red flag when prophecies are given under the term “My daughter” etc.

Jesus said to me  “Jazweeh, did you feel my Spirit in that rainbow or even in the area during the event?  No I did not.   What I felt was strong ringing in the ears a sign of strong frequencies being accumulated in the area for hologram manifestation.  The rainbow was metallic NOT NATURAL.  Furthermore the sky was gray and dark unlike a normal rainbow setting of a blue sky, rainbow after the storm.

It was a mock to God’s rainbow after the storm cause it was metallic, and came during the dark clouds.

Do we not ALREADY KNOW WHAT THE RAINBOW STANDS FOR?  The rainbow is not a sign of the rapture NOT AT ALL.  The rainbow always represented the promise of God that He would not destroy the earth by water again ever.  So why would God change up the meaning of a sign that is so great a comfort to us?  I don’t think He would do that.

WE KNOW SATAN HAS A COUNTERFEIT FOR ALL THINGS GOD.

Expect the counterfeit rapture as well.

What will be the true signs of the rapture?  We should feel The Spirit of God as we know Him.

The True sheep know His voice.

Not a light show in the sky accompanied by high frequencies, a feeling of remorse, regret, guilt, shame, and ringing ears.  God’s Spirit brings a feeling of gratitude, and Love, along with great awe, fulfillment, and enlightenment.

=BUT THIS RAINBOW LOOKED LIKE A HOLOGRAM AND IT FELT AND SOUNDED LIKE HIGH UNNATURAL FREQUENCIES.  Around it everything was gloomy. There was a feeling of doom rather than a feeling of great Love and LIfe.

Satan’s Motives for a Fake Rapture

Image how crushed the true believers would be if they all thought they were not good or close enough to Jesus to make His rapture? If all the 144 who are God’s army thought they missed the mark their heads would be hung low and they would not be raging in battle of end times.

What if Jesus’ entire bride that they missed the rapture? Image how many would fall away thinking they did all they knew how to do and still somehow could not make the grade per say?  This would crush the true prayer life of the chosen.  It would deceive them into the beast’s greatest lie that they are and always will be “UNWORTHY OF GOD’S LOVE”.

That is A LIE.  God LOVES US and one way or another we WILL BE WITH HIM.

NEVER EVEN GIVE UP HOPE.  FOR THE GREATEST OF THE GIFTS ARE LOVE, FAITH, AND HOPE.