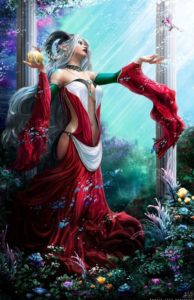 Brothers and sisters we now know well what was really meant by “the sufferings of Christ”.  Yes He suffered crucifixion but there was a suffering, I think that dragged on for years & years.   To watch the blind walking into a pit by their own volition is not easy.  Imagine years on end of seeing blind men walking into pit upon pit.  If you see what the chosen few are meant to see, then you will suffer by watching the blind, and blind guides sport the abomination making them desolate as they worship the wolf’s words (the desecrated bibles).

But they have made their choices.  Every one of us has the same opportunities to make the choices toward becoming the clay in God’s hands.

What are the end of days special supernatural gifts?

“They honor me with their words but their heart is far from me.”

It’s baffling to watch men honor Jesus with words while they wear the mark of the beast on their forehead and spew blasphemy from the newly changed bibles, not knowing evil from good they deceive themselves primarily.  So many.  So many.  The chosen cannot help but to feel betrayed. But we too were deceived.

Clearly the parable of the talents became the prophecy of the talents.  Those who didn’t use the spiritual gifts they had have now lost them.  The redistribution of gifts occurred.

But also have come upon the winds, new gifts especially fitted for the end of days.  These gifts are new and different.

The chosen few can see the creature (raptor demon) that causes the strong delusion nesting on the heads of the many.

For Clarification, What is the strong delusion?

The strong delusion is triggered by a demonic entity that lands on the head or face and sticks like suction cups to the head.  It looks like a small raptor creature with four appendages and a head shaped like a raptor. Be not deceived, technology may have some part in the strong delusion but it is mainly dark & spiritual.

To be sure, God doesn’t send out lies.  We the few know it’s impossible for God to lie therefore this script is another falsity.

We suppose it used to read ‘allowed them’ to be smitten with a strong delusion.

What does the strong delusion do to people?

It takes their memories (some of them) especially pertaining to the bible and many Mandela effects.  It interjects new memories therefore it can change reality & their own history in their minds.

It changes memories of the person who consummates with it, without them knowing a change has occurred.  Proof?  Proof is the supernatural bible changes and the Mandela effects that most Christians do not see.  The bible turns vile and the Christians still honor it glorify, and worship it calling the book by one of Jesus’ names.  Some even glorify the bible more than God Himself.

The strong delusion seems to be removing the effects of the tree of the knowledge of evil from the minds of these people so when they read vile and evil scripture that is new, even with new word terms they see it as “Godly” and have memory of these twisted new vile word terms like “spake” for instance or “goodly & betwixt” & so on.  The words scream of witchcraft.

“If any man come to me, and hate not his father, and mother, and wife, and children, and brethren, and sisters, yea, and his own life also, he cannot be my disciple.”

God Will Remove All Deceptive Bibles from Earth

Of course Satan will be blamed for that.

The days of a “Holy Bible” the holy place, are over.  There is no need for the book anymore, we now have God’s words written on our heart.  The Sword of The Spirit of God. (not some “spirit of His mouth” ridiculous!)

Oddly Christians still manage to glean Truth & goodness from the books but not for long.  Surely within the year the book will become desolate as it changes on the shelves along with men’s memories of it.  It IS WRITTEN (God’s words are written in the hearts of men and in Heaven) it will become desolate!  Desolate of wisdom, Love, and God’s great knowledge.

Another New End of Days supernatural gift is the ability to read prophecy in abstract shapes.  Similar to reading tea leaves but without the person needing to drink from the cup we can read abstract shapes as if reading a book.  Especially on the foreheads & heads of men.

The ability to read foreheads to not only to see the mark of the beast and the wing of abomination the raptor.  But also we can read prophecies in the foreheads of men.

Example-I looked on one man’s forehead and saw the pale horse of the apocalypse running.  That means this person will soon see the death rider for himself and will endure the end of days tribulation.  We hope those with both the mark of the beast and the seal of God will finally let go of their anchors to the beast system.  These are their heart’s attachments we have all had.  So too as they bring the vile bible to their breast it deceive them.

These earthly anchors could be people, or doctors, or reliance on the beast system such as money etc.  God’s Grace is sufficient for us nevertheless, the chosen are not perfect, no one is.  God looks upon the heart.  The chosen still may have an anchor or two they struggle with.  As long as flesh resides on us we will have fleshly side effects.

Confirmation of The Gift of Sight by Abstract Shapes

Granted some probably already had this gift but now it’s given far and wide to the chosen for end of days understanding.

A confirmation of the forehead reading gift was sent to “tribulation now” YT channel J. Kleck.  A drawing was sent of his face and head with not only was the creature –the raptor drawn nearly exactly as I drew it myself.  But also a dead sheep was drawn that the artist & visionary saw on the head of Jonathan Kleck. I am sure the gift of abstract shapes is how the 144 saw those things on the head of Kleck to draw them & send them in for our verification nation wide of the new sight gift and a verification of the raptor itself.

New gift-The chosen can also see the seal of God a cross or Jesus with His arms out on the foreheads of the chosen.

What Does a Strong Hold Look Like to The Chosen?

They appear as walls of demons, dark walls of different colors.  Some are larger than others.  We believe the “restrainer” may have been the lesser of two evils on earth.  One evil holding back another.  We see by the gift the restrainer is fading & nearly beaten.  He was a man in a black top hat who held back a mighty strong hold.

But for the end of the age to play out, God will allow the restrainer, be it Holy Spirit or evil or both to decrease so evil may increase.

We have seen a set up of doors on earth all over the highways that are set by sorcery & witches spells to accommodate Satan’s return to earth with his demons.  Most of the highway crosses are doors into hell that will soon open.

To close them you need consecrated ground or real holy water, a certain prayer in Jesus name and anointing oil.  If you want to close the doors near your neighborhood.  At night you will see the black cloud mass over these crosses, showing you that they are doors to Hell.

“Oh that is CRAZY!”  A List of Some of The New Gifts

Hell YES it’s crazy!  Make no mistake sorcery and witches are ushering in their Father just as we usher in Jesus’ return.  Test my words.  Why would the state put up all those crosses?  As if the beast gives a shit about the life of the slaves.  If anything the beast came to kill steal and destroy.  It does not accommodate goodness without an ulterior motive.  Hence the crosses.

Chosen can now heal themselves (to a point) sending their own tiny angels throughout their bodies to destroy demonic illness.

The chosen now know Truth from lies when they hear it, automatically.

The chosen are becoming far better at hearing the voice of God or their guides.

The chosen have been purified now knowing how to eat.  They are no longer dead animal eaters.

The chosen have learned earth’s bounty.

The chosen can understand animals sometimes.

The chosen can hear words in the thunder that voice has gone from labor to judgement.

The fallen serpents who know their father want desperately to be gods and to have the power of a god with eternal life.  Only The Creator appoints gods.

Jesus told us “be faithful with a little and I will give you authority over alot”.  That is panning out.

The chosen see the new earth coming.  Some will go home others will stay as guardians of the earth.

Not only that but the chosen can actually feel like certain people feel within themselves.  You could call it a form of empathy but it runs much deeper.  If in danger the elect can feel the intentions of those around them who have ill motives.  We would have felt this for a long time saying “I just felt like my sister” or “I just felt like my friend”.

How can this be?  The elect could always feel the spirits of others therefore when they feel that spirit inside themselves they know who it is and what the intention is of that person.  More will be revealed of this gift.  I expect it will grow.

I may have left out several new gifts. I will update this article at some point.